The protesters with Arkansas ADAPT said they are demanding better, long-term care options for the disabled. Some shouted that they didn't want to be warehoused in nursing homes. ADAPT is a national grass-roots community that, according to its website, organizes disability rights activists to engage in nonviolent direct action.

The individuals were reportedly seeking to attend a meeting with AHCA inside the Victory Building on W. Capitol Street in downtown Little Rock.

Jessie Kemp with Arkansas ADAPT said, "We like to enclose them and let them know that that's the small amount of space they're going to be in if they were in a nursing home, if you're in the institution. Let her know what it felt like to be trapped, just like these people are trapped in a nursing home." 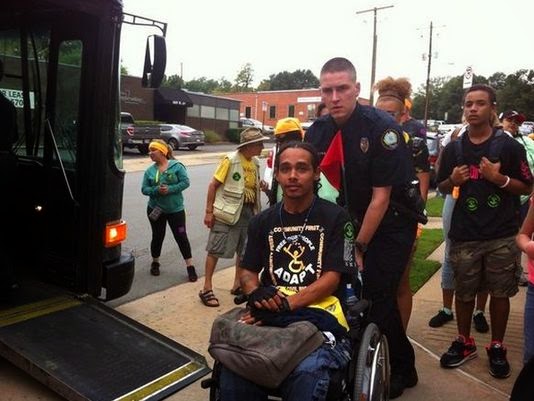 Jessie Kemp says, "We were protesting trying to get them to take a meeting since they didn't return our requests or our calls." AHCA represents nursing facilities in the state and ADAPT is demanding the association end its opposition of the Community First Choice Option. This option would allow all Arkansans who qualify for institutional placement to choose community supports. It also provides a new mechanism for Arkansas to shift the delivery of long-term services to home and community based settings. Kemp continues, "They're weeded into these nursing facilities and that's where they stay because they don't know there's other options available to them."

Demonstrators decided to take their concerns to Rachel Davis, the executive director of the Arkansas Health Care Association. Dozens of people filed into the lobby and hallway of AHCA's headquarters on west Capitol Avenue, making their point evident. "We like to enclose them and let them know that that's the small amount of space they're going to be in if they were in a nursing home, if you're in the institution. Let her know what it felt like to be trapped, just like these people are trapped in a nursing home," Kemp adds.

Sgt. Cassandra Davis said 75 to 100 demonstrators were present and 36 of those participants refused to leave and were later arrested and charged with criminal trespassing. Those arrested were reportedly transported using three to four buses from Central Arkansas Transit. She said no one was injured and no force was used to make the arrests.

THV11 reached out to Rachel Davis on Monday evening. Davis is the executive director for AHCA, and is the person the protesters were trying to speak to. She said because there is an ongoing police investigation, she's unable to make a statement, though she did confirm the protesters came to her office.

About 200 people marched Monday morning to the state Capitol to garner support of a program that would allow Arkansas to move about 2,900 people with developmental disabilities off a waiting list for home-based services.
Members of ADAPT, a national grass-roots disability rights group, met around 9:30 a.m. along Broadway to begin their walk toward Gov. Mike Beebe’s office, where they asked him to consider the Community First Choice Option for the state.
The option, established under the Affordable Care Act of 2010, provides a 6-percent increase in federal funding to state Medicaid programs for home- and community-based attendant services, according to medicaid.gov.
It would also give Arkansans who qualify for institutional placement the choice of community support rather than institutionalization.
The governor addressed the crowd at about 11:30 a.m. in his conference room.
"I am certainly supportive of [the option], but it’s going to require some support from the Legislature, because you don’t want them in January to turn against it and stop it,” Beebe said. "Of course, I’m not going to be here. Come Dec. 31, my eight years as governor will be over, and you’ll be dealing with a new governor. We’ll do our best to try to give him all the facts, whoever it may be, and certainly try to let them know what this really means to the people.”
Beebe said the Community First Choice Option would eradicate a waiting list of those waiting to be placed in community care. 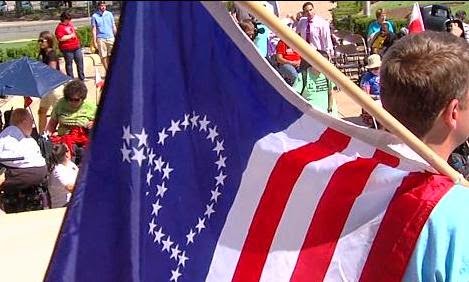 Brenda Stinebuck, an Arkansas ADAPT leader, read a list of ADAPT’s demands to the governor following his initial address to the crowd.

Stinebuck said that, in addition to Beebe making a public statement committing to the implementation of the option, the group wants the governor to: commit to develop a plan with Arkansas ADAPT to increase the percentage of Medicaid funding for long-term services and supports so that at least 60 percent of funds support home- and community-based services by 2020; restore transition coordinator and intensive transition maintenance funding to the level before the cut imposed on Sept. 1; and establish governor-appointed work groups of disability rights advocates and representatives from the aging and disabled community.
Gov. Beebe said he couldn’t commit to doing anything in 2020 because he won’t be in office.
“I’m not your problem,” Beebe said to Stinebuck. “Our biggest restriction on community-based services is the inability of folks who want to take advantage of the funding and options that are there.”
Stinebuck, who is also staff member of the Spa Area Independent Living Services in Hot Springs, said she thought today’s march was a success.
“The governor met with us so quickly and so eagerly. He publicly said in front of this huge group that he supports Arkansas implementing the Community First Care Option, which will allow 2,900 people who have been on waiting lists for up to nine years receive services,” she said.
The march moved to the Arkansas Health Care Association in the Victory Building later in the day. The building is located at 1401 W. Capitol Ave., Suite 180.
Little Rock Police Department spokesman Sgt. Cassandra Davis said between 75 and 100 demonstrators were there "seeking to attend a meeting to be held inside the building."
Thirty-six people were arrested, charged with criminal trespassing and later released, according to Davis.
"No one was injured and no force was used," she said.
Read Tuesday’s Arkansas Democrat-Gazette for more on this story.
Some information for this story was contributed by Andy Davis of the Arkansas Democrat-Gazette
http://www.arkansasonline.com/news/2014/sep/15/disability-rights-group-marches-capitol/
Posted by Jim Watkins at 8:35 AM