Accessible Taxi 2014 Hearings at Chicago City Hall, Only 163 of the roughly 6,000 taxis in Chicago are accessible - UPDATES

this post on Chicago Accessible Taxi saga will be updated as reliable information is available.. 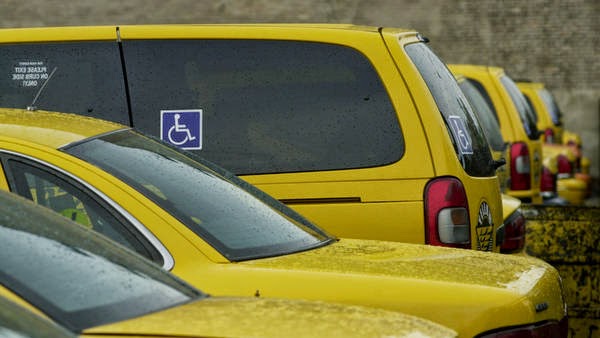 Only 163 of the roughly 6,000 taxis in Chicago are accessible, but the city has a plan to double that number by 2018. (Nuccio DiNuzzo, Chciago Tribune)

Chicago officials are expected to unveil a plan Tuesday to more than double the number of taxicabs that are accessible to people with disabilities by the end of 2018.

The announcement on wheelchair-accessible taxis will be made just hours before a City Council hearing addressing the current shortage.

Only 163 of the roughly 6,000 taxis in Chicago are accessible, according to the Chicago Department of Business Affairs and Consumer Protection.

The Emanuel administration will announce plans to add at least 204 more accessible taxis over the next four years, officials said.

"For many of us, taxis are a necessary means of getting from point A to point B," Mayor Rahm Emanuel said, "and more wheelchair-accessible vehicles are a step in the right direction."

By the end of 2018, taxi licensees who own at least 10 medallions will be required to have 10 percent of their fleet made up of wheelchair-accessible vehicles.

Currently, taxi licensees with at least 20 medallions are required to have 5 percent of their fleets made up of wheelchair-accessible vehicles, officials said.

The expansion of fully accessible taxis will be subsidized in part by the city's accessibility fund, which currently contains $3.5 million. The fund is supported by fees paid by the taxi and ride-share industries, under a new city ordinance regulating ride-share services, officials said.

Ride-share companies including Uber X, Lyft and Sidecar have cut into the traditional taxi business by contracting with noncommercial drivers who provide rides in their private vehicles. Customers of the ride-share services use cellphone apps to arrange rides.

Advocates for the disabled community said the planned increase is not enough.

Before the hearing, members of the disability community, joined by the heads of the council committees , are scheduled to hold a news conference calling for an increase in the number of accessible taxis in Chicago. They will present strategies for reaching the goal, including mandates, incentives, enforcement and new funding sources, supporters of the initiative said.