Depression Isn't Just 'All In Your Head'


Depression touches people differently, making dealing with the condition more of a personal experience than a universal one. Some describe the illness as a dark cloud, while others liken it to being trapped in an empty space.
Regardless of how it personally feels, what many people don't know is that the illness can also take a physical toll on the body. Those symptoms, combined with the emotional side effects, have the potential to be draining. 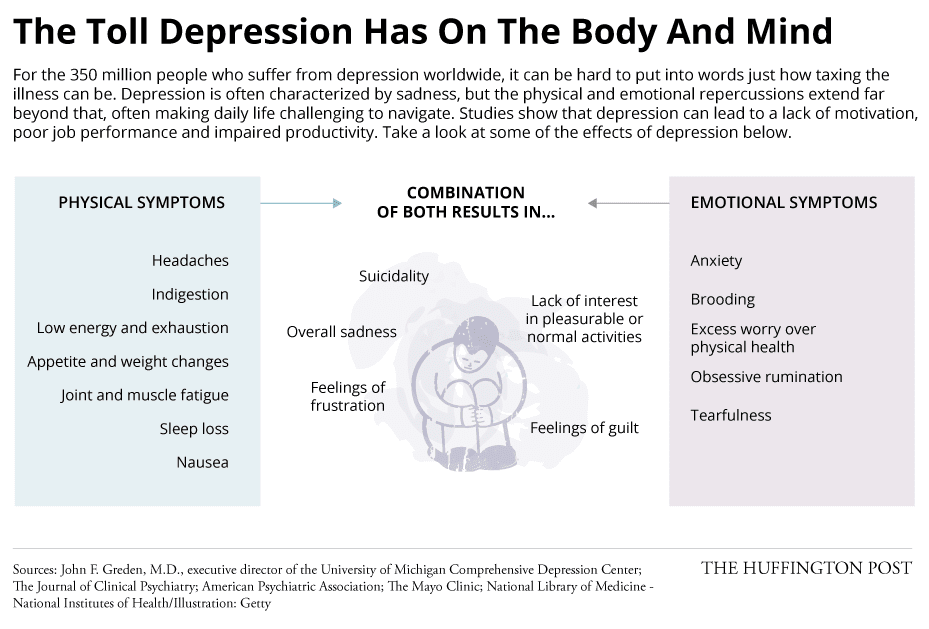 PHYSICAL SYMPTOMS
Headaches. These pains can be one of the hallmark physical signs of depression, particularly in adolescents, says John F. Greden, M.D., executive director of the University of Michigan Comprehensive Depression Center. While most people report that their depression headaches are dull, sometimes the illness can cause tension headaches, Everyday Health reported. Depression can also put people at greater risk for developing migraines.
Indigestion. People with depression may experience stomach problems as well, Greden says. Additionally, digestive issues such as colitis or stomach ulcers may be worsened by extreme stress or depression, Everyday Health reported.
Lack of energy. "So many people with varying types of depressions complain of fatigue, making it one of the more common symptoms," Greden explains. Studies have also shown that depression can lead to decreased motivation and poor job performance. Without being diagnosed with the depression, many people tend to think this lack of energy is a result of other physical illnesses, like hypoglycemia or other thyroid issues, Greden adds.
Appetite and weight changes. Depression has the potential to significantly alter eating habits. This could mean eating too much or too little, and as a result, weight gain or weight loss.
Joint and muscle pain. "Depression makes pains that people have worse and it may even be associated with the onset of certain pains," Greden says. "There's an intensification of joint and muscle pains." Research suggests that there is even a strong association betweenfibromyalgia and depression.
Sleep loss. A change in sleep patterns is one of the most common warning signs of depression ("there's this certain restlessness that occurs," Greden says). Depression also has been linked to insomnia and obstructive sleep apnea.
Nausea. As part of the stomach problems caused by depression, people may experience queasiness and nausea, as well as diarrhea, which is also a resulting symptom of anxiety.
EMOTIONAL SYMPTOMS
Anxiety. Even though they're different disorders, depression and anxiety can commonly occur together, according to the Mayo Clinic. This has the potential to yield other physical symptoms like a racing heartbeat, sweaty palms and even panic attacks, Greden says.
Brooding and obsessive rumination. "The worst part of depression is that it narrows the field of vision into a very small tube so they can't see the options," Adam Kaplin, M.D., an associate professor in the departments of psychiatry and neurology at Johns Hopkins University, previously told HuffPost Healthy Living. This includes obsessive focus on the bad and ignoring the good. Research has shown that relentless focus on the negative and moody reflection over what has gone wrong may have a strong link to depression.
Excess worry over physical health. With everything going on in the body, it's easy to dismiss depression as an option when everything feels so physically painful. "It's difficult to go to work, to concentrate, to laugh or focus on your assignments when you're hurting in this way," Greden says.
Tearfulness. The illness can result in tearfulness and feelings of sadness during a depressive episode. While many people associate depression with this specific emotion, it's important to note that depression and sadness are not the same thing. "Depression is a clinical term -- and a lot of times when people say they're depressed, they really mean sad. The words that we use are very powerful and it's important to make that distinction," David Kaplan, Ph.D., chief professional officer of the American Counseling Association, previously told HuffPost Healthy Living.
COMBINATION OF SYMPTOMS
"If people have a lot of physical symptoms, and they have associated mood changes, the clinician ought to be considering that they're linked to underlying depression," Greden says. The simultaneous occurrence of the two types of symptoms can have a life-altering effect, from feelings of anger and guilt to dangerous thoughts about suicide. It's important to pay attention to the prevalence of both the physical and the emotional signs in order to address those potential hazards, Greden adds.
"Unfortunately, in health care, we tend to split the mind and body sometimes," he says. "So if someone complains of their physical symptoms ... that's what clinicians tend to target. So, that preponderance of physical symptoms for people who also have the mood symptoms sometimes tends to overwhelm the underlying cause. But [the symptoms] go together. They hold hands. They're all part of the same syndrome."
Have a story about depression that you'd like to share? Email strongertogether@huffingtonpost.com, or give us a call at (860) 348-3376, and you can record your story in your own words. Please be sure to include your name and phone number.
Need help? In the U.S., call 1-800-273-8255 for the  National Suicide Prevention Lifeline.
http://www.huffingtonpost.com/2014/09/24/depression-symptoms_n_5868190.html?utm_hp_ref=healthy-living
Posted by Jim Watkins at 7:40 AM