as reported by CBS Chicago..

CHICAGO (CBS) — The Bears versus the Packers meant the parking lots filled up quickly and officers were watching to see who was taking the handicapped spots. 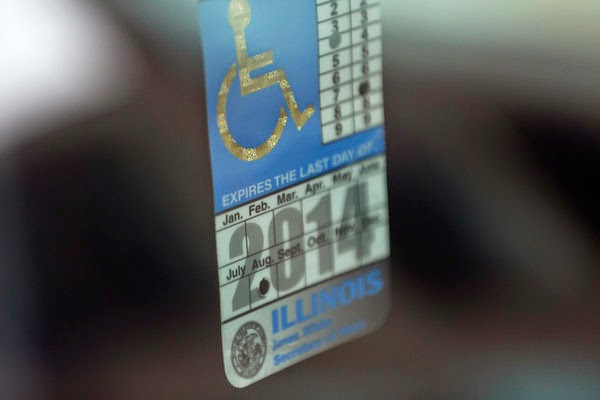 The Illinois Sec of State’s office had been on a campaign to let Bears fans know they will pay dearly if they park in a handicapped spot when they shouldn’t. Officers were out checking every vehicle that parked in a handicapped spot to make sure the person who the placard was issued to had to match up.
Bill Bogdan is in a wheelchair and says it’s a matter of safety for those with disabilities and convenience too.
“It gives me enough room so that I can open up my door wide enough and I can get my wheelchair directly out of the car where I don’t have to worry about car door bumping up against another car or what have you,” Bogdan said.
Since the state started the crackdown there have been fewer tickets. It used to be about a dozen were handed out each Sunday but now it’s just one or two.
If you’re caught illegally using someone’s disability placard the fine is $600 and it could mean a six month suspension of your driver’s license.
http://chicago.cbslocal.com/2014/09/28/officers-check-handicap-placards-of-cars-parked-at-soldier-field/
For more information on Illinois Disability Placard programs, visit: http://www.cyberdriveillinois.com/services/persons_with_disabilities/disabilities.html
Posted by Jim Watkins at 4:33 PM