(CBS) – Chicago - This week is the focus of the ongoing controversy over the right to die.
Advocates for assisted suicide from around the world are meeting in Streeterville, while opponents are protesting outside.
“It has to be a very personal decision based on the medical and ethical circumstances,” says the “godfather” of the physician-assisted suicide movement, Derek Humphry.
Humphry said he sees progress “bit by bit” toward implementing laws similar to those on the books in Oregon, Washington and Vermont. Court rulings in Montana and Wisconsin have effectively given doctors the right to work with terminally ill patients who wish to end their lives.
Outside of the Embassy Suites Hotel, at 511 N. Columbus Drive, a persistent group of protesters have staged a sit-in. They claim to represent groups from across the country and beyond but are united for the conference as the group “Not Dead Yet.”
Its CEO, Diane Coleman, said that what people considering assisted suicide need is care, not a lethal prescription.
“They deserve to have the support, whatever treatment they need for depression, whatever home care they need so they don’t feel like they’re a burden on their family,” she said.
Coleman contends that many of those who eventually opt for assisted suicide do so because they don’t get the care and believe they are a burden.
Humphry said he believes the deciding decision for most is pain, and said the Oregon, Washington and Vermont laws specifically exclude those who seek lethal assistance merely because they are elderly or handicapped.
Coleman warns of a “slippery slope” that could lead to euthanasia of the unwilling, and says it is already being done in some European nations. She says even in those states that now allow physician-assisted suicide, there are no independent outside monitors present to make sure that is what the patient wants.
Proponents say that laws in the three states require two doctors to sign off on paperwork for those who seek assistance in dying.
“It’s an individual call of the person, not a judgment that anyone else can make,” said Frank Kavanaugh, a board member of the host group Final Exit.
The meeting of the World Federation of Right to Die Societies is meeting in the United States for the first time since 2000, when it met in Boston. Some of the protesters, including Coleman, said this may be their last chance to debate the issues with proponents.
“I barely can travel any more. I’m getting too old,” she said. “I did it because I have to.”
Proponents remain equally committed.
“This is the ultimate personal and civil liberty, the right to choose when and how to die at the end of your life,” Humphry said.
The conference runs through Saturday.
http://chicago.cbslocal.com/2014/09/18/right-to-die-conference-in-chicago-draws-protest
### 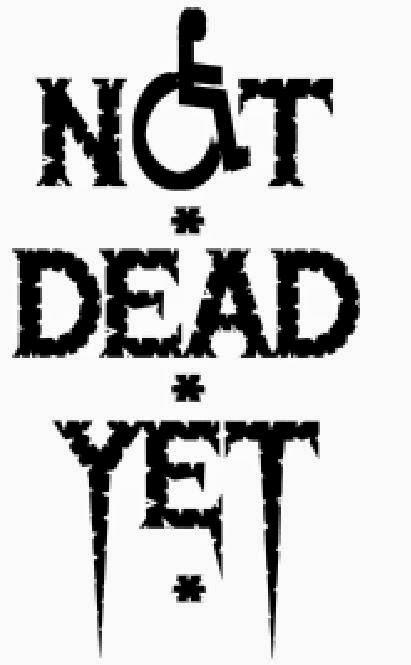 The disability rights group Not Dead Yet announced today that it would lead a three-day protest vigil against the World Federation of Right to Die Societies during the Federation’s biennial meeting being held in Chicago. The American group Final Exit Network is hosting the meeting, which runs from September 17-20 at the Embassy Suites Chicago. The group has scheduled a rally to open the protest vigil at 511 North Columbus Drive on September 18 at 12 PM.
”We are here to contradict the message of these groups that it’s better to be dead than disabled,” said Not Dead Yet president Diane Coleman of New York.
The meeting is being hosted by the Final Exit Network, an American group known for its use of “Exit Guides” to instruct and assist people with “irreversible physical illness, intractable pain, or a constellation of chronic, progressive physical disabilities” to kill themselves using “Exit Bags” filled with helium.
The 2012 PBS documentary, “The Suicide Plan,” included statements and video in which Final Exit Network leader Ted Goodwin admitted and demonstrated holding the person’s arms down to prevent them from pulling the Exit Bag off of their head.
“This is a collection of reckless suicide fanatics,” said John Kelly of Second Thoughts Massachusetts, whose group was instrumental in defeating assisted suicide bills and a referendum in that state.
The World Federation of Right to Die Societies was organized in 1980 to bring together the various groups in Europe and Anglophone countries which promote euthanasia and assisted suicide. The Federation last met in the United States in 2000, when it was also protested by Not Dead Yet in Boston.
“These are the people that we have seen in the news, people who condoned the suicides of the Belgian twins who were losing their sight, or of the woman who was afraid she would not be able to see a stain on her shirt.” said Amy Hasbrouck from the Canadian group, Toujours Vivant/Not Dead Yet, which is working to defeat Canadian initiatives that will be promoted at the conference.  Hasbrouck and other Canadians will be joining the Chicago protest vigil.
http://www.notdeadyet.org/2014/09/press-release-disability-rights-activists-to-protest-international-euthanasia-group-meeting-in-chicago.html
Posted by Jim Watkins at 8:48 PM