Amtrak has “limited progress” in compliance with the Americans with Disabilities Act, Inspector General’s report 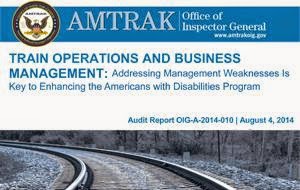 Amtrak has made “limited progress” over the last two years in improving compliance with the Americans with Disabilities Act, according to the report.

In 2011, 48 of the 482 stations Amtrak serves were ADA compliant. Amtrak committed estimated funding of $100 million to address the problems during 2012 and 2013.  The inspector general found that nearly half of the funds provided, went toward management expenses.