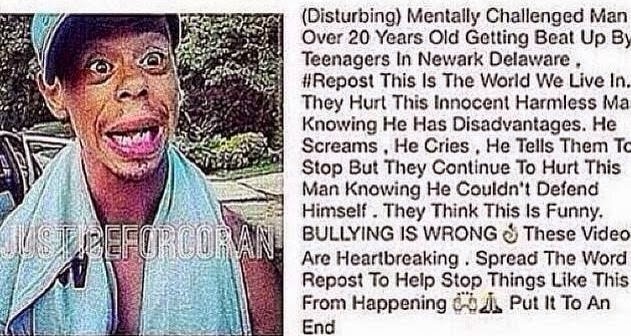 NEW CASTLE, Del. (Associated Press) -- 09/08/2014
Two Delaware teens were arrested in the beating of a mentally disabled man after they showed up to police headquarters to complain about being harassed when their contact information was posted to social media, along with a video of the assault, authorities said Monday.

New Castle County Police arrested the 13- and 14-year-old boys, both of Newark, on Saturday. They were charged with offensive touching, assault of a vulnerable adult, and conspiracy. They were released on bonds of $2,500 after being arraigned.

Their names were not released.

The teens were arrested after they and their parents went to police headquarters in New Castle to complain about threatening phone calls they received as a result of their personal information being shared on social media with a video of the assault, New Castle Officer Tracey Duffy said Monday.
She said their complaints triggered an investigation that led to police finding and viewing the video of the assault, which shows a 26-year-old mentally disabled man being body-slammed to the ground, stomped on and repeatedly punched in the head.

Sixteen-year-old Angeliz Marrero, of New Castle County, told WPVI-TV in Philadelphia that she reposted the video to her Instagram followers after she first spotted it.

"I was so mad but at the same time the first thing I thought was, `I have to do something about this,'" Marrero said.

"It spread so fast and I'm just so grateful for everybody that's helping me out because if it weren't for everybody helping, supporting and everything, this wouldn't even go viral and that man really deserves justice," Marrero said.

GRAPHIC VIDEO with Violence & Hate Language
By @_justice_for_coran__ “These videos are heart breaking, & bullying is wrong
#justiceforcoran #TheBullyProject”
The video is shorten (15 seconds) from the 3 videos these teens had posted on the web.

They hurt this Innocent Harmless Man Coran, knowing He has a disAbility . He Screams , He Cries , He Tells Them To Stop But They Continue To Hurt This Man Knowing He Couldn't Defend Himself . They Think This Is Funny. BULLYING IS WRONG!
These Attacks Are Heartbreaking, Yet More and More of These Attacks on People with disAbilities are Occurring!
We as society, and the disAbility community must make this a priority to help educate the public, and support victims with disAbilities who have endured violence.
Jim at Ability Chicago
Posted by Jim Watkins at 2:29 PM