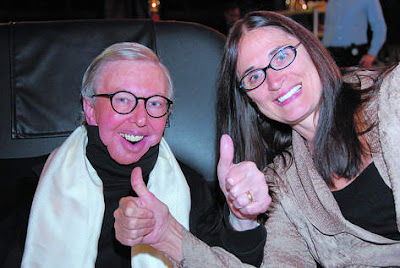 Access Living, an organization that for more than three decades has worked to protect the civil rights of mentally and physically disabled individuals, honored one of its biggest supporters — and inspirations — at its 31st annual gala last Thursday night.

Sun-Times film critic Roger Ebert picked up the “Lead On” award, given yearly to individuals who promote the empowerment and independence of people with disabilities, with his ever-present wife, Chaz, by his side at the swanky, Hollywood-themed, soiree held at Navy Pier.

Ebert was presented the award by longtime friend and Access Living CEO Marca Bristo . Following a video tribute to the Sun-Times star, in which he admitted that the thing he misses most is the ability to laugh out loud, Ebert delivered a short speech with the help of his high-tech voice synthesizer, stating, “Disability is something that one never thinks can happen to them, but I am proof that it can happen to anyone.”

More than 1,000 guests packed the Peninsula to celebrate the luxury hotel’s 10th anniversary in grand style.

After walking the red carpet and being greeted by giant lion-shaped ice sculptures in the hotel’s lobby, most partygoers first flocked to the outdoor terrace to enjoy the sunset — as well as a sushi buffet, dim sum spread and towering stilt-walking geisha girls. Later, the party heated up with the jazzy sounds of the Ken Arlen Orchestra in the grand ballroom, bluesy tunes in the Bar and DJ-driven beats in Avenues Restaurant-turned-Parisian nightclub. Corporate head honchos including Mesirow Financial CEO Richard Price and Executive VP Les Coney, Johnson Publishing Chairwoman Linda Johnson Rice, and Peninsula Hotels COO Peter Borer and Chicago GM were all seen enjoying the music in the various rooms.

The epic evening, which lasted into the wee hours of the morning, was hosted by Michael Kadoorie, chairman of the Hong Kong and Shanghai Peninsula Hotels, and was meant to be a celebration of the past, present, and future of the Peninsula brand.
Posted by Jim Watkins at 8:43 AM