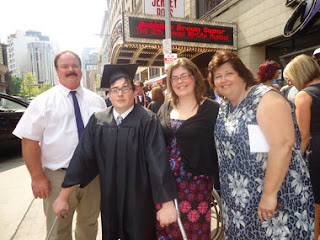 Among hundreds of graduating seniors this June, one Brecksville-Broadview Heights High School student stood out, up, and beyond the rest of his class, despite a physical disability so profound he has spent most of his school years in a wheelchair.
To the amazement of his classmates and teachers, Daniel Lemmer, 18, of Broadview Heights — a humble young man with spina bifida — walked with the assistance of crutches across the State Theatre stage on June 4 to receive his diploma from BBHHS.

His mother, Susan Lemmer, said she was so overcome by emotion when Dan walked that she couldn’t control her camera. Lemmer said the audience was astounded and they all clapped. Her tears were flowing as she sat with her husband, Don, and daughter Amy, 23.

Dan said he hadn’t walked around school since his days at Chippewa Elementary School, because his disease caused great fatigue. His classmates got a preview of his walk at the rehearsal preceding graduation.

“It was just awesome, because nobody knew I could walk until then,” he said. “It meant everything to me, because I got surgery in August to be able to help me with walking.

“The surgery really helped me and it didn’t go to waste. I’m hoping to get to point where I have minimal use of my wheelchair.”

Given Dan’s interests and energy, this likely will happen.

Dan attended his prom and an after-prom party at Embassy Suites in Independence on May 14, until the wee hours, and then had to line up for the Rite Aid Cleveland Marathon at 5:30 a.m. the same day to participate in the wheelchair division of the 26.2-mile race.

Despite setbacks of two flat tires and proceeding in the wrong direction, Lemmer finished second of eight with a time of two hours and 31 minutes. “I was just thinking about finishing,” he said. “I was taken off-course and should have been faster.”

To prepare for the marathon, Dan trained with his father three or four times per week. Lemmer said her son and husband made it 42 miles once, but Dan said he typically trained for 20 miles per session.

Dan’s athletic achievements also include three years with the Cleveland Cavaliers Division III Wheelchair Basketball team, a national team that has played all over the country.

“In 2010 they were recognized as national champions in Colorado by Dan Gilbert who gave them all championship rings,” said Lemmer.

Dan credits his parents for motivating him to achieve more, yet his mother credits Dan for her profession — as a special education assistant at Chippewa Elementary School. “He is my inspiration to do this,” she said.

In addition to a graduation party, Dan plans to attend the University of Illinois wheelchair basketball camp at the end of June. In the fall, he is preparing to start at Cleveland State University, where he expects to major in computer sciences or special education.
Posted by Jim Watkins at 10:33 PM