Tracy Morgan under fire for mocking the disabled in return to stand-up "retarded kids" and "cripples." : June 29 2011


(refresh if no video)

Tracy Morgan may want to invest in a bus, because his apology tour may not be over just yet.

The Arc, a nonprofit advocacy group serving people with intellectual and developmental disabilities, is the latest organization demanding an apology from the comedian for remarks he made during his stand-up routine Saturday — his first performance since his infamous antigay rant. 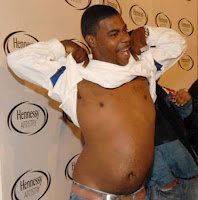 The "30 Rock" actor put his foot in his mouth this time while performing two hourlong shows on Saturday night at Caroline's comedy club in New York, where he once again denied he was homophobic and claimed his father was the lead singer of the Village People.

But during his routine, things once again went south for the comic when he began telling the crowd not to "mess with women who have retarded kids."

"Them young retarded males is strong," he said. "They're strong like chimps."

He then segued into a bit about hooking up with a girl he called "a cripple" with a dialysis machine and a prosthetic arm, while groans could reportedly be heard from the crowd.

"Tracy Morgan should apologize immediately," The Arc's CEO, Peter Berns, told E! News. "This quote is far too offensive to be excused as comedy, and it is very hurtful to people with intellectual and developmental disabilities and their families.

"Mr. Morgan has an incredibly powerful platform from which to fix this, and if he's learned anything in the last few weeks, he can't bomb this apology," Berns added.

It was the comic's first time onstage since his June 3 show, in which he said he'd "stab" his son if he came out as gay.

He had argued that homosexuality is a choice because "God don't make mistakes."

He quickly issued an apology, saying he went too far and "was not funny in any context."

Then Tracy kept apologizing. And apologizing some more. He met with young gay teens and visited Nashville again to say sorry to anyone he offended with his rant.

Time will tell whether people with developmental disabilities will feel the same way about Morgan's publicized onstage antics.

We at Ability Chicago would like to encourage all to leave a message of there feelings of Mr Morgan's comments on the following social media sites, and NBC.com ; please share this story with friends and family: