Stress in the City: Brain Activity and Biology Behind Mood Disorders of Urbanites: ScienceDaily - June 22, 2011

Being born and raised in a major urban area is associated with greater lifetime risk for anxiety and mood disorders. Until now, the biology for these associations had not been described. A new international study, which involved Douglas Mental Health University Institute researcher Jens Pruessner, is the first to show that two distinct brain regions that regulate emotion and stress are affected by city living. These findings, published in Nature may lead to strategies that improve the quality of life for city dwellers. 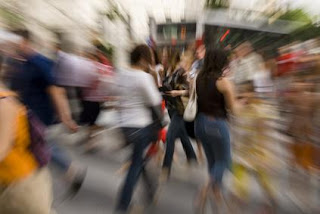 "Previous findings have shown that the risk for anxiety disorders is 21 percent higher for people from the city, who also have a 39 percent increase for mood disorders," says co-author Jens Pruessner, a Douglas researcher. "In addition, the incidence for schizophrenia is almost doubled for individuals who are born and brought up in cities. These values are a cause for concern and determining the biology behind this is the first step to remedy the trend."

Pruessner, with his colleagues from the Central Institute of Mental Health in Mannheim, looked at the brain activity of healthy volunteers from urban and rural areas. In a series of functional magnetic resonance experiments involving the Douglas' previously developed 'Montreal Imaging Stress Task',(MIST) protocol, they showed that city living was associated with greater stress responses in the amygdala, an area of the brain involved with emotional regulation and mood. In contrast, urban upbringing was found to be associated with activity in the cingulate cortex, a region involved in regulation of negative affect and stress.

"These findings suggest that different brain regions are sensitive to the experience of city living during different times across the lifespan," says Pruessner. "Future studies need to clarify the link between psychopathology and these affects in individuals with mental disorders.These findings contribute to our understanding of urban environmental risk for mental disorders and health in general. They further point to a new approach to interface social sciences, neurosciences and public policy to respond to the major health challenge of urbanization."

Disclaimer: This article is not intended to provide medical advice, diagnosis or treatment. Views expressed here do not necessarily reflect those of ScienceDaily or its staff.
Posted by Jim Watkins at 6:40 AM