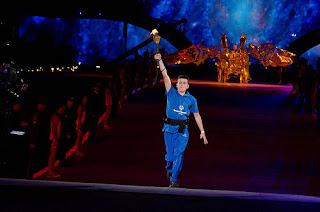 Approximately 7,500 Special Olympics athletes from 183 countries, including 137 Chinese, participate in the Games that will run to July 4 in a string of 30 venues across Athens.

From Sunday they will compete in 22 sports, sending the world the message that persons with mental disabilities can become valuable members of the international community.

The three-hour ceremony won high remarks for a spectacular display of fireworks and the simplicity of music and dance performances inspired by ancient Greek mythology and culture.

They were matched with moving performances by internationally famed artists such as American singer, songwriter, musician and producer Stevie Wonder.

At the end of the performance they threw them down to the ground "back inside the arms of mother earth" in a symbolic representation of breaking down the walls of prejudice against intellectually disabled people. 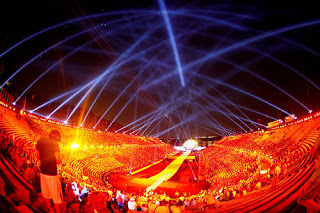 Following the delegations' parade applauded by thousands of spectators, Chinese actress Zhang Ziyi in the role of a presenter, welcomed the audience to the historic stadium at the home of one of the most ancient civilizations of the world, beyond China.

"History continues today," she stressed, urging all citizens across the globe to be part of the celebration of an international family, as it happened during the 2007 Shanghai Special Olympics, watching brave athletes compete and show their special talents.

Twelve Special Olympics messengers, including a 20-year-old Chinese girl, briefly narrated their major wins in everyday life activities, such as learning how to cook tasty Chinese dishes or passing a driving license test in the first attempt.

After a video tribute to Eunice Kennedy Shriver who founded the Games in 1968, her son and current Special Olympics Chairman Timothy Shriver and Greek Special Olympics Organizing Committee President Joanna Despotopoulou addressed the event, welcoming the world to "a celebration of human strength at the birthplace of the Olympic Games."

Despite a difficult time in Greek history, debt-ridden "Greece has not failed the Special Olympics athletes and our athletes will not fail Greece," chanted Shriver.

He called on all citizens across the globe to unite and support a revolution of dignity under way by courageous people who were depicted as modern Ulysses -- sailors on a ship who overcome harsh adventures in one of the theatre performances of the show.

Following the raising of the Special Olympics flag which was transferred by Olympic medallists such as figure skating veteran athlete Michelle Kwan, and the performance of the anthem of the Games, the stadium's cauldron was ignited with the Flame of the Hope which will burn to the end of the Games.

The flame, which was lit under the Acropolis hill on June 9 and travelled Greece and neighbour countries, was transferred inside the arena on a "Chariot of the Sun" led by seven torch bearers who represented regions of the globe, children holding balloons and olive tree branches, as well as artists in Greek traditional costumes. The ceremony ended with the performance of the song of the Games by Greek singer Alkistis Protopsalti and Italian tenor Vittorio Grigolo, paving the way for the major show the Special Olympic athletes will give in the coming hours during the largest international multi-sport event of the year.

The Games also represents the most significant event to be hosted in Athens after the 2004 Olympic Games.

Approximately 40,000 family members, over 2,300 coaches and 25, 000 volunteers stand by their side, while around 3,000 journalists from across the world record the feats of the athletes who represent four million people with intellectual disabilities across the globe.