David Cameron's bills may glide through, but reality will bite people with disabilities in U K : June 17 2011

If governing were PR, Cameron would be in power for ever. But, from NHS to welfare, so much recklessness is bound to crash. 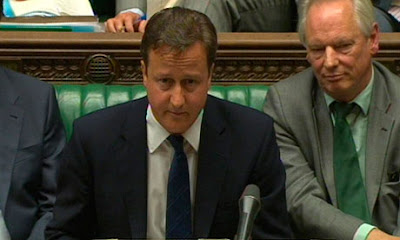 [photo: David Cameron listens as Ed Miliband rounds on him over cancer patients during PMQs this week. Photograph: Pa]

A small group of disabled demonstrators, some in wheelchairs, were protesting outside Atos HQ this week. The company that conducts work capability tests was recruiting new examiners, who remove 70% from incapacity benefits, judging only 30% too frail to work.

Here is a common catch-22: with faraway test centres, if you can get to a centre you're fit enough to work, but those who can't are struck off for failing to attend. One demonstrator said his cramped flat is too small to fit his wheelchair, so he hangs on to the furniture to get around – but because he doesn't use a wheelchair at home, he was judged fit to work. A social worker emails me about her stick-thin, sick client living on pureed food yet rejected for disability living allowance, but she died last week waiting for her appeal. That's what it takes to cut £18bn from the welfare budget. Expect an avalanche of such stories, and not just in the Guardian.

Ed Miliband caught David Cameron out in prime minister's questions this week over the 7,000 cancer patients losing their right to employment and support allowance if they are not back at work within a year. They contributed to sickness benefit in national insurance for all their working lives. As the welfare reform bill passed through parliament this week, Labour were amazed that Cameron hadn't inspected it with a fine-tooth comb: neither Blair nor Brown would have dared go ignorant into the chamber on so tricky a bill. But Cameron will soon discover the bill's contents when thousands of mothers abandon work as their childcare credit is cut, or when care home residents are trapped indoors with no mobility allowance.

What of the half of disabled children losing all disability benefits? The bill was passed with nothing to stop housing and council-tax benefit cuts causing a wave of evictions in the south-east. Just wait until single and divorced mothers find they have to pay £100, plus 12% of any maintenance, for the state to pursue errant fathers. Does Cameron know all this, or is he carried away by his eloquent claim that the still undetermined universal credit will smooth all rough edges and solve all the age-old welfare conundrums? Has he learned nothing from the health service catastrophe?

True, Cameron's NHS U-turn this week was done as elegantly as a London taxi driver spinning on a sixpence. He is good at the talk, sounding so eminently reasonable when he said what more politicians should say. "I think people respect a government that feels it is strong enough to say, hold on, we haven't got every element right, we're not taking enough people with us, let's stop, let's get this right. People will throw a few bricks at you, but so what?" Labour should dare say that about some past errors. If governing were just public relations, Cameron would be in power for ever. But it isn't. Bills may glide through parliament on a sea of silken words but reality bites back.

His "reformed" NHS is now a monster: don't even try to draw the organogram. Semi-dismantled primary care trusts, each with their own governing boards, are randomly assembled in temporary clusters, all with their own boards and CEOs, but will be reorganised again to fit council boundaries, leaving some PCTs where GPs refuse to do commissioning. Hospital doctors and nurses will sit on these GP clinical commissioning groups influencing the contracts, probably in their favour. Clinical senates will sit above them, as will health and wellbeing boards. Local authorities can appeal against commissioning decisions, while a new citizens panel oversees competition and choice and HealthWatch guards patients' interests.

Don't give up, keep following: Monitor, designed to ensure competition, now combines that with a contradictory duty to create "integration". It still oversees foundation trusts (all hospitals soon), until they float as free businesses run by their often eccentric governing boards, elected by a few producer interests or local obsessives, free to do any amount of private practice. On high sits the all-powerful NHS Commissioning Board, which now needs eight regional branches – just like the semi-abolished strategic health authorities. Will EU competition law apply, prising open the NHS? Wait for the legal wording of the bill's new amendments to know.

This great farrago adds tiers more bureaucracy and builds in lethal rigidity. How can anyone merge an A&E or shift money from hospitals into the community, let alone close a bad hospital, when blocked by every local interest? Yet private companies may still appeal to Monitor to demand the right to cherry-pick profitable services. This turmoil is to be run with 40% fewer managers, many of the best already departed in dismay. Out of this chaos 4% a year more productivity must be squeezed (never achieved anywhere) while suffering the greatest NHS cut in after-inflation income. Waiting lists are rising: this week's figures show a third of hospitals already missing the 18-week treatment target that Cameron rashly pledged to keep. A&E and diagnostics waits rose too. Clegg beamed at his political "victory" – but reality will bite back within the year.

Few of Cameron's reckless bills will do what they promise – and some will crash. The Work Programme, rolled out last week, pretends it will get more people into jobs than any scheme in the job-rich years, using private companies with worse records than Jobcentre Plus. Not surprisingly, the public services white paper is quietly shunted into July's parliamentary dog days.

Who knows if Cameron and his ministers are deluded, dangerously ignorant or snake-oil charlatans who hope no one will notice the real effect of remedies sold with enough flamboyant promise. Will Labour gain from all this? Almost certainly. Miliband is canny enough to side-step the elephant traps, neither defending the work-shy nor encouraging strikes that harm public service users. His "squeezed middle" expresses a genuine truth: the middle and bottom left behind for years on frozen incomes, are now "paying taxes to fund the bankers".

His refreshing attack on boardroom greed was well timed in the week that figures showed bankers gave themselves unthinkable increases last year: Goldman Sachs's Lloyd Blankfein took 15 times more than the year before. These are foundations for Labour regeneration. When Cameron guru Steve Hilton told baffled Tory MPs, "Our policies should be like a fairground", did he mean Alton Towers and, if so, are their policies Ripsaw, Oblivion or Nemesis?

polly.toynbee@guardian.co.uk
Posted by Jim Watkins at 1:08 AM