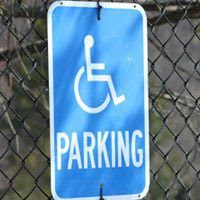 A woman was cited this weekend for parking closer than she should have to downtown bars.

Naperville Police Sgt. Gregg Bell said an officer was patrolling the Chicago Avenue parking deck around 2 a.m. Sunday morning when he came across a car parked in a spot designated for people with disabilities.

“He figured at 2 a.m. would be out of the realm of possibility that someone handicapped would still be out,” he said.

Bell said the officer stuck around the parking garage until the woman returned, and confronted her about the credentials.

“At first she said the placard belonged to her,” he said, adding that the woman, who is in her 20s, changed her story after being questioned further, and admitted it had belonged to her grandmother. She then later told the officer that she used the placard so that “she would have a short walk to downtown bars,” according to a written police report.

She was cited by the officer for improper use of a handicapped placard, and will face a fine, Bell said. It was unknown, he said, if the woman had stolen the placard or asked for permission. Bell added that the woman was not intoxicated, but she had been at bars that evening.
Posted by Jim Watkins at 8:45 AM