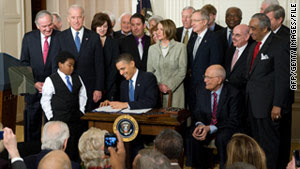 Washington (CNN) -- The political and legal future of the sweeping health care reform bill received a big boost Wednesday after a federal appeals court in Cincinnati ruled in favor of the Obama administration and Congress, concluding a key provision in the landmark legislation was constitutional.

The "individual mandate" requiring nearly all Americans to purchase health insurance by 2014 or face financial penalties -- was challenged in federal courts by a large number of individuals and groups, who said people should not be forced to purchase a product like medical coverage. A partially divided U.S. Court of Appeals for the 6th Circuit disagreed.

"We find that the minimum coverage provision is a valid exercise of legislative power by Congress under the Commerce Clause," said the three-judge panel on Wednesday, in a 64-page opinion.

The opinion is the first of three rulings that will emerge from federal appeals courts around the country in the coming weeks over the Patient Protection and Affordable Care Act.

The issue is almost certain to eventually reach the Supreme Court, perhaps by year's end. More than two dozen other legal challenges to the law are floating in lower federal courts.

The health care reform act was passed by the Democratic Congress last year, and championed by President Barack Obama.

A key part of the ruling was written by Judge Jeffrey Sutton, a President George W. Bush appointee and considered a conservative on the court. He said the health care field is different from other streams of "commerce."

"Regulating how citizens pay for what they already receive (health care), never quite know when they will need, and in the case of severe illnesses or emergencies generally will not be able to afford, has few (if any) parallels in modern life. Not every intrusive law is an unconstitutionally intrusive law," he said. "Time assuredly will bring to light the policy strengths and weaknesses of using the individual mandate as part of this national legislation, allowing the peoples' political representatives, rather than their judges, to have the primary say over its utility."

Sutton added, "The government has the better of the arguments." He was supported by Judge Boyce Martin -- who is considered a liberal and was named to the bench by President Jimmy Carter. He turned aside the argument by opponents of the law that economic "inactivity" cannot be regulated by the national legislature.

"Congress had a rational basis for concluding that the minimum coverage provision is essential to the Affordable Care Act's larger reforms to the national markets in health care delivery and health insurance," he said. "The provision regulates active participation in the health care market, and in any case, the Constitution imposes no categorical bar on regulating inactivity."

Judge James Graham -- a Reagan appointee -- agreed with most of the opinion but expressed some concern that Congress could go too far in other economic arenas, under limits imposed by the Constitution's commerce and spending clauses.

"If the exercise of power is allowed and the mandate upheld, it is difficult to see what the limits on Congress's Commerce Clause authority would be. What aspect of human activity would escape federal power?" he asked. "Such a power feels very much like the general police power that the Tenth Amendment reserves to the States and the people. A structural shift of that magnitude can be accomplished legitimately only through constitutional amendment."

Various state and private challenges to the law are also before federal appeals courts in Atlanta and Richmond, Virginia.

Another challenged provision mandates expansion of Medicaid, the low-income health program administered by the states.

The high court could be asked this fall to take formal jurisdiction over one or more health care appeals, and it could decide the matter perhaps by 2012, a presidential election year.

The issue could ultimately turn on whether forgoing medical insurance or coverage represents economic "activity," an area long considered proper for congressional oversight in interstate commerce. Opponents, including more than two dozen states, argue it is not.

The Justice Department countered that since every American will need medical care at some point in their lives, individuals do not "choose" to participate in the health care market. Federal officials cite 2008 figures of $43 billion in uncompensated costs from the millions of uninsured people who receive health services, costs that are shifted to insurance companies and passed on to consumers.

In the case before the 6th Circuit, four individual plaintiffs from Michigan say the government has no business interfering with their individual health care decisions.

The court's ruling would technically affect only those states covered by the 6th Circuit: Michigan, Ohio, Kentucky, and Tennessee. But it would help set the tone for other courts considering similar issues.

The Obama administration applauded the ruling.

"We will continue to vigorously defend the health care reform statute in any litigation challenging it," said a Justice Department statement. "Throughout history, there have been similar challenges to other landmark legislation such as the Social Security Act, the Civil Rights Act, and the Voting Rights Act, and all of those challenges failed. We believe these challenges to health reform will also fail."

One pressing concern is whether parts of the law already in effect can continue to be enforced. Those sections currently being administered include small business tax credits, federal grants and consumer protection measures. The federal government wants to know whether these provisions can continue while the issue is under appeal, particularly in the 28 states that have filed suit.

Other questions that could prompt a high court review include:

-- If one provision of the law is found unconstitutional, does the entire act become invalidated?

-- Should employers be forced to provide some level of health insurance to their workers?

-- Can religious, moral, and other objections to the law be considered?

-- Do states and private groups have "standing," or legal authority to bring their claims, or is congressional taxing authority ultimately exempt from such lawsuits?

Oklahoma and a range of private groups have also filed separate legal challenges that are concurrently working their way through federal courts around the country.

The Affordable Care Act has about 450 components, placing a number of new or revised regulations on states, private insurance companies, employers and individuals.

Federal judges in Florida and Virginia in recent months found parts of the law unconstitutional, while colleagues in Michigan and Virginia upheld the provisions.

Health care reform, a top Democratic priority since the Truman administration, was passed by the last Congress in a series of virtually party-line votes. Obama signed the act into law in March 2010. The law is widely considered to be the signature legislative accomplishment of the president's first two years in office.

Among other things, the measure was designed to help millions of uninsured and underinsured Americans receive adequate and affordable health care through a series of government-imposed mandates and subsidies. The federal government stated in court briefs that 45 million Americans last year were without health insurance, roughly 15 percent of the country's population.

Critics have equated the measure to socialized medicine, fearing a bloated government bureaucracy will result in higher taxes and diminished health care services. About two dozen challenges have been filed in federal courts nationwide.

Opponents derisively labeled the measure "Obamacare." Republican leaders, who captured the House of Representatives in the midterm elections, have vowed to overturn or severely trim the law.
Posted by Jim Watkins at 8:11 AM