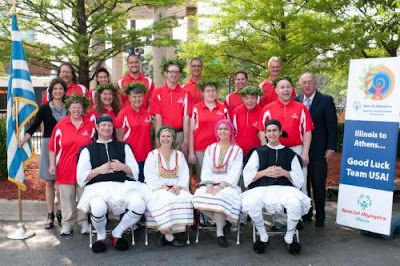 Special Olympics athletes from Illinois were crowned with olive leaves in the ancient tradition at a ceremony in Chicago's Greektown on Friday evening as they prepare to depart for Greece and the Special Olympics World Games ATHENS 2011. Stephanie Vlahakis, executive director of the National Hellenic Museum in Chicago, said, "Chicago and Athens both play an important role in Olympic history. In 1896, Athens was the birthplace of the modern Olympic Games; in 1968, Chicago was the birthplace of Special Olympics. We are proud you are representing us in Athens."

The Special Olympics World Games ATHENS 2011 from June 25 – July 4 will host more than 7,000 athletes from 180 countries, including more than 400 members of Special Olympics Team USA. Eight athletes, seven coaches and two management team members from Illinois are part of Team USA. The whole team departs for Greece on Sunday and will spend four days on the island of Rhodes as part of the Host Town program, to get acclimated to the country prior to the start of the Games.

"The athletes from Illinois and their family members are in for an experience of a lifetime at the World Games," said Doug Snyder, president and CEO of Special Olympics Illinois. "All the pomp and ceremony of a regular Olympic games is waiting for them including a spectacular Opening Ceremonies and 10 days of outstanding competition and life in the Olympic village. But most importantly, this event is a celebration of the accomplishments of athletes with intellectual disabilities and sends a message of acceptance and respect for all people."

Financial contributions to help cover the cost of sending the Illinois delegation to Greece can be made at: http://www.firstgiving.com/fundraiser/IllinoisDelegation/2011worldgames

For more information about World Games and the Illinois delegation, visit www.soill.org.


SOURCE Special Olympics Illinois
Posted by Jim Watkins at 8:59 AM