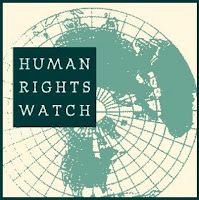 Open Letter to Mr. Loverdos, Greek Minister of Health :
Regarding the living and care conditions at the Children’s Care Center of Lechaina

The European Disability Forum (EDF) and Human Rights Watch are writing to you to express our deep concern about reports of inhumane and degrading conditions at the Children's Care Center of Lechaina ("the care center") in Ilias Prefecture. EDF's national member in Greece, the National Confederation of Disabled People, has intervened a number of times to the government, to the Ombudsman for the Rights of the Child, Mr. Giorgios Moschos, and in the media. Human Rights Watch raised concerns about the center during a meeting with the Secretary General of the Ministry of Health, Mr. Giorgos Katrivanos, in February 2011.

According to reports by the Greek Deputy Ombudsman for the Rights of the Child[i], Mr. Giorgos Moschos; the Inspection Body for Health Services and Welfare; and volunteers for the Youth in Action Program[ii], the residents in this center are living in dire conditions that violate their human rights and breach Greece's obligations under international law. We therefore urge you to investigate and take all necessary measures to improve the living and care conditions of the patients at the care center as a matter of priority.

The Deputy Ombudsman's report, the result of ongoing investigations that began in 2009, noted an insufficient number of doctors and nurses; systematic sedation; and practices such as tying children and adults with developmental disabilities to their beds to reduce self-harm and the use of wooden cage beds. In addition, the report observed that the care center hosts persons with different chronic diseases and disabilities (physical, intellectual and multiple disabilities, autism, etc.). A lack of available places in other institutions means that residents remain in the care center when they become adults and in some cases remain there all their lives. The housing of adults in a center meant for children violates Greek law.[iii] The report concludes that these children and adults are living in exceptionally difficult circumstances despite the considerable efforts of administration and staff.

We are also deeply concerned about reported deaths and allegations of abuse in the care center, including news reports of beatings and two deaths in the span of a few days: a 35-year old woman with intellectual disabilities who died of pneumonia and a 28-year-old man who died after taking his medication and feeling discomfort. Media reports assert that there was no doctor at the care center at the time of his death.[v]

According to the report of the Deputy Ombudsman and the facts contained in the reports of the Inspection Body for Health Services and Welfare and the volunteers for the Youth in Action Program, the care and living conditions in the center violate the prohibition of inhuman and degrading treatment in the Convention Against Torture (CAT), the International Covenant on Civil and Political Rights and the European Convention on Human Rights (ECHR), all to which Greece is a State Party, and the Convention on the Rights of Persons with Disabilities (CRPD), which Greece has signed but not yet ratified.

Both the CAT and the CRPD explicitly require States to take all necessary steps to prevent persons, including persons with disabilities, from being subjected to torture or cruel, inhuman or degrading treatment or punishment. Additionally, the conditions appear to violate their human dignity, the right to physical and mental integrity and the prohibition of violence against persons with disabilities, all enshrined in the CRPD and inextricably linked to the rights in the CAT.

During the meeting between Human Rights Watch staff and the Secretary General of the Ministry of Health, Mr. Giorgos Katrivanos, in February 2011, we were pleased to learn that two investigations are underway: (1) an investigation of the Youth in Action volunteers' report by the Prosecutor's office; and (2) an inquiry by the Ministry's own investigative body. But we are unaware of the timeframe for those investigations, or what consequences could flow from them.

We recognize that Greece has limited financial resources to remedy the problems in the center identified above. Nevertheless, the lack of financial resources does not relieve Greece of its obligation to do its utmost to protect vulnerable groups and to ensure that persons with disabilities are treated in a humane way.

While we acknowledge that the Ministry of Health has initiated an investigation, we urge you to undertake the following further steps to address the above-described concerns:

•Ensure that the investigation is conducted promptly and its findings made public. It should seek to identify those responsible and any steps necessary to correct the problems identified.
•Ensure that the staff of the care center cooperates fully with the Prosecutor's office.
•Immediately improve the living and care conditions of all residents in the center, including ending the use of cage beds, systematic sedation and tying of patients to their beds.
•Ensure regular monitoring and supervision of the care center by the Inspection Body for Health Services and Welfare.
•Prioritize in Ministry budgets the following longer-term steps:
•o Recruit sufficient qualified staff to fill permanent positions, including permanent doctors and child psychiatrists; and,
•o Separate children and adults by adapting the premises and living environment depending on the age requirements.
Furthermore, we call on the Greek government to ratify the CRPD and its Optional Protocol without delay and to fully implement them to ensure that persons with disabilities enjoy their rights and have a greater voice about their own lives and treatment.

Thank you for your attention to these important matters. We look forward to a continued dialogue.

[i] Greek Ombudsman - Cycle for Children's Rights, Operating Conditions of the Unit for Social Care for children with disabilities "Children's Care Center of Lechaina", March 2011.

[ii] The volunteers asked not to publish their name (the report was made available to Human Rights Watch).

[iv] According to the Inspection Body, there are 87 vacant permanent positions, which include positions for doctors, child psychiatrists, psychologists, social workers, special educators, speech therapists, physiotherapists, and occupational therapists.

# For the Human Rights Watch click headline or visit: http://www.hrw.org/
Posted by Jim Watkins at 6:45 PM