All the preparations for this year are in place! Come back each day to discover new surprises in the Kids' Countdown Village, where we'll offer a new holiday game every day until December 24th.
Visit: http://www.noradsanta.org/en/countdown.html 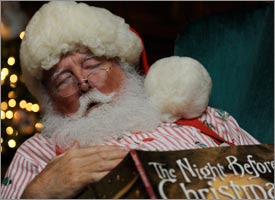 Based on historical data and more than 50 years of NORAD tracking information, we believe that Santa Claus is alive and well in the hearts of children throughout the world.

Santa Claus is known by many names, including Saint Nick. Historians claim that the history of Santa starts with the tradition of Saint Nicholas, a 4th century Christian priest who lived in the Middle East in an area of present-day Turkey who became famous for his kindness. He was known for giving gifts to the less fortunate, sprinkling gifts of gold down people's chimneys and hiding surprises in their stockings.

It may be that the Santa we know today emerged from the legacy of Saint Nicholas. Clearly, Santa's basic approach to gift giving is strikingly similar. Could they be the same person? Only Santa Claus knows for sure. 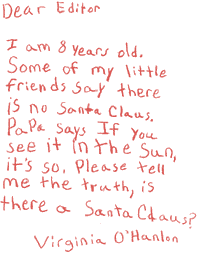 Long before the Wright brothers flew the first airplane or the Montgolfier brothers launched the first hot air balloon, Santa had to find a way to travel from house to house at great speed. We know from our Santa cam images that Santa’s choice for quick transportation was a herd of flying reindeer. Detailed information on these reindeer remains elusive; however, we do know, that Santa enlisted the reindeer to help him with his worldwide mission of gift-giving. A veil of sweet mystery hides the rest.

Virginia’s letter, written in December 1897, is the most famous example of a child wanting to know about Santa.