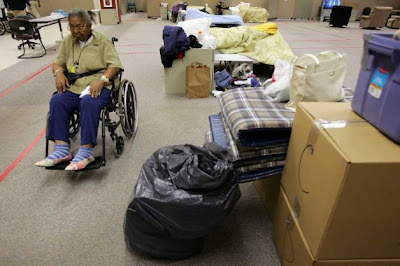 [photo: In the wake of Katrina, KellyUSA housed hundreds of evacuees. Some emergency officials feel new rules will overtax their ability to handle similar large-scale disasters]

Kevin Dinnin can be forgiven if he seems distracted. He has just stepped away from a national conference call to work out the details of responding to a cataclysmic earthquake that could displace 25,000 Americans along the New Madrid Fault, which stretches from Illinois to Arkansas.

Dinnin's place at the table shows how far Baptist Child and Family Services, which he leads, has come since 2005, when state officials asked him to set up emergency medical shelters here for victims of Hurricane Katrina.

The chaos of that experience led the San Antonio-based agency to publish a field guide for such shelters, and today BCFS has become the national — and even international — expert in medical sheltering.

It has a contract with FEMA that covers a fourth of the nation, with a 160-person, rapid-response team that flies to several disasters a year.

Now BCFS has found itself at the fringes of a controversy. At FEMA's behest, it drafted new federal guidelines for taking care of fragile and disabled people during disasters — a document that has generated surprise and anger among some emergency management officials across the country.

“It is the law,” Dinnin said. “There's not an exemption in civil rights legislation for disasters.”

The guidelines call for local communities to plan for accommodating people with any type of physical disability or medical condition in every emergency shelter set up in the aftermath of hurricanes, floods, wildfires and the like. Only those needing hospital-level care can be housed somewhere else.

In the past, those with limited mobility or requiring oxygen often have been placed in separate “special needs” shelters or in facilities such as nursing homes until they could return home, they note. The guidelines make it clear that any separate care and housing is a violation of federal law.

“You're taking a situation where you're trying to do the best you can on your very worst day, and you're being asked by the Department of Justice to provide a level of service that can barely be met on a day-to-day basis when conditions are good,” said Lyn Gross, an emergency planning official in Washington state, who wrote about the controversy for the International Association of Emergency Managers. “I think they're going to be impossible to comply with.”

Marcie Roth, a presidential appointee who heads FEMA's office of disability integration and coordination, said it just makes good sense to put all evacuees in the same shelters.

Dinnin, who also took part in the task force that created the guidelines, sympathizes with both sides. While he thinks that the guidelines can be followed in most emergency situations, it will be difficult in catastrophic disasters like Katrina, he said.

“What we're seeing, I think, is the pendulum and how it swings oftentimes too far,” Dinnin said. “We have grossly underprepared as a nation for persons with functional needs and medical needs. Because of that, I think there is a great emphasis to require governmental jurisdictions to consider the needs of that population in their planning scenarios. That's the right thing to do. It's the ‘how' that has to be, in my view, further debated.”

Dr. Sandra Guerra, regional medical director of the Texas Department of State Health Services, is part of a state response team and has assisted in every major state emergency shelter in recent years. She agreed that the guidelines came as a shock to many.

“I think we're ahead of the game (in Texas) in comparison to many states because of the fact we've already identified that there was a special population that needed special attention,” Guerra said. “It's just that we were planning on all those resources going to a medical special-needs shelter. Now we have to plan for all those resources to go to general population shelters.”
Posted by Jim Watkins at 10:37 PM