A World Stage to Build Awareness

The 2011 Special Olympics World Summer Games in Athens, we celebrate the year-round efforts and achievements of the movement’s athletes. World Games are not only exciting sports events but also create lasting legacies of positive change in participating countries. 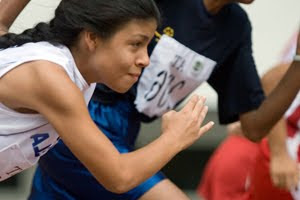 [photo: Eyes on the Prize. Special Olympics athletes have been pushing their limits, as they train for the upcoming summer Games.Special Olympics Chairman and CEO Tim Shriver invites all to come and see the World Games in action. The impact goes beyond competition: the Games stand as a symbol of hope for a more just and unified world]

This summer, nearly 7,500 athletes from 180 countries will converge on the most important site in the history of Olympic sport for the 2011 Special Olympics World Summer Games in Athens, Greece.

It will be the world’s largest sporting event of the year, a celebration of the abilities and accomplishments of people with intellectual disabilities and clear progress toward a new global vision of acceptance. (Visit the official 2011 World Summer Games website)

From June 25 through July 4, the World Summer Games will also involve 2,500 coaches, 25,000 volunteers, 3,000 technical officials and referees and tens of thousands of family, friends and fans.

They will gather to watch and cheer as Special Olympics athletes compete in 22 Olympic-style sports in the birthplace of the modern Olympic Games.

Special Olympics Chairman and CEO Tim Shriver invites all to come and see the World Games and the athletes in action. The impact goes beyond competition, as the Games stand as a symbol of hope for a more just and unified world. Hear more.

Looking even further ahead, South Korea will be next to host the World Games -- the Special Olympics World Winter Games in 2013. (See press release of the announcement.)

Alternating between summer and winter, the Special Olympics World Games are one of the world’s largest sporting events, drawing as many if not more athletes than the Olympics. Every two years since 1968, athletes from more than 100 nations have gathered to celebrate sport and showcase the abilities of people with intellectual disabilities. This prominent world stage brings attention to the Special Olympics movement and helps create positive, sometimes lifesaving policy change for people with intellectual disabilities in countries around the world.

Alcino Pereira from East Timor is an example of how one athlete’s journey to the World Games can open doors for others, even in a place of conflict. East Timor is a war-torn nation that has been struggling for more than 30 years to gain independence from Indonesia. In all this devastation, people with intellectual disabilities are often abandoned and forgotten. Pereira, 38, an orphan whose father was killed in an uprising, has never had access to health care, and he is unable to speak. He walks with a limp and has limited motion in one arm – but he loves to run. Every day he runs across his home town of Dili in worn-out sneakers, earning him the nickname, “the running man.”

In 2007, “the running man” was East Timor’s first Special Olympics athlete to compete at the World Games – making him famous in his home country. The people of East Timor, including the prime minister and the bishop, rallied in support of his trip to Shanghai, China, site of the Games. Though Pereira did not win his race, he brought spectators to their feet. When he returned to East Timor, he became the face of a public awareness campaign aimed at helping more citizens with intellectual disabilities in his country.

The bravery of athletes competing at World Games inspires participating nations and brings much-needed attention to the conditions of people with intellectual disabilities within their borders. At the same time, the World Games provide opportunity for cross-cultural conversations about how to foster inclusion of people with intellectual disabilities. Athletes, families, volunteers, world leaders and Special Olympics celebrity ambassadors convene at the Games to attend policy summits, exchange ideas and talk to the public about the life-changing transformations Special Olympics brings about in participants and communities.

The World Games are also catalysts for change within the countries that host them. World Games stimulate local economies and create momentum for citizen engagement by promoting grass-roots volunteerism – as seen in Ireland during the 2003 World Games, when 30,000 people from across the nation volunteered to work at Games in Dublin.

This catalyzing effect extends beyond communities to include governments as well. Ireland passed a new disability act after it hosted the 2003 World Games. And leading up to the 2007 World Summer Games in Shanghai, China unveiled an unprecedented five-year government growth plan that included new educational, job and health care opportunities for individuals with intellectual disabilities across the nation.

Special Olympics Founder Eunice Kennedy Shriver did the best job of summing up the power of the World Games:
"Special Olympics is one 'issue' any local or national government can and will support once they have the unique experience of hosting a World Games and learning more about these athletes. I say this emphatically because it has happened after every World Games in our history. It always happens."

# For more info click headline or go to: http://www.specialolympics.org/special-olympics-world-games.aspx
Posted by Jim Watkins at 8:40 AM