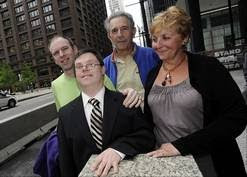 [photo: On their way out of a federal courthouse where a landmark ruling gives people with developmental disabilities the freedom to move out of institutions and into a smaller places in the community, Stanley Ligas and David Cicarelli celebrate with Liga's sister, Gina Foster of St. Charles, and Cicarelli's father, Jim, of Arlington Heights: Mark Welsh | Staff Photographer]

As the federal judge announces a landmark civil rights ruling giving people with developmental disabilities the freedom to move from institutions into community settings, a beaming David Cicarelli brings his hands up to his chest as if he might applaud right there in the 25th-floor courtroom. Instead, the 37-year-old man, who has below-average intelligence, says he has a more appropriate celebration in mind.

“What I'm going to do is have an open house party,” Cicarelli says, as he envisions moving out of the Riverside Foundation in Lincolnshire where he has lived since 1997 and into a smaller group home near his parents, Jim and Juli, in Arlington Heights. Cicarelli puts his arm around Stanley Ligas, his prospective housemate and fellow plaintiff in the civil rights suit. Ligas was born with Down syndrome.


“I can get my own clothes. I can get my own bed. I've got my roommate,” Ligas says with a nod toward his buddy and fellow plaintiff. Ligas, 43, lived in Chicago until his parents died, and then spent a year with his sister, Gina Foster, and her four children in their St. Charles home before moving into Sheltered Village in Woodstock in 1994. Ligas and Cicarelli were part of the original lawsuit that was filed in 2005.

U.S. District Court Chief Judge James F. Holderman praises the teams of lawyers on all sides of the case. The lawyers spent tens of thousands of hours hammering out an agreement that protects current residents of facilities for people with developmental disabilities while granting new freedoms to those who have expressed an interest and shown an ability to live in less-restrictive environments within their communities.

“It's basically the story of civil rights,” says John Grossbart, lead attorney for the plaintiff's case and a managing partner of SNR Denton, the law firm that donated work to this case and a cause that has been brewing since the Americans with Disabilities Act of 1990. “Turning the aircraft carrier takes some time but we're going to turn it.”

The lawsuit was filed against the state by five residents of institutions and later expanded into a class-action suit on behalf of all residents of such facilities, seeking the right to move to less restrictive environments.

Attorneys representing the state said they were in 100 percent agreement with the judge's ruling, saying it gives choices to individuals with disabilities without harming the institutions that care for them.

At the courthouse Wednesday, Cicarelli, wearing a T-shirt promoting Equip for Equality, the not-for-profit advocacy agency that helped spearhead this case, grants interviews with reporters and poses for photos with Ligas, who wears a jacket and tie. They celebrate the decree consented to by the legal parties involved and hailed by the judge as a societal “advance” that “should be the law.”

“Make no mistake, this is a civil rights victory and validation for a group of citizens who have mostly been on the short end of the stick,” says Barry C. Taylor, the legal advocacy director for Equip for Equality. “This is a landmark decision.”

Dealing with issues ranging from labor unions to concerned parents, attorneys for the state and institutions such as Misericordia reached agreements with the plaintiffs to protect existing programs that serve residents well while giving some residents the freedom to live in less-restrictive community homes. One survey shows that of the 6,000 residents currently living in institutions, 300 express an interest in taking advantage of the plan to use funds for smaller homes.

“It is significantly less expensive to provide services for people in a community setting,” Grossbart says, calling Holderman's acceptance of the agreement a “win-win” for all the people of Illinois.

“This is a good thing for a lot of good people,” says Carl M. La Mell, president of Clearbrook, the Arlington Heights-based agency that provides services, support and opportunities to people with disabilities and their families. He says giving people a choice of where they want to live “is something that should have been done a long, long time ago.”

For Ligas and Cicarelli, the move could come as soon as a couple of months. Ligas has a part-time job in the community and Cicarelli wants one. Cicarelli says he also wants a kitten, and the ability to plan his own meals, decide the color of his bedroom, buy a punch bowl, keep diet pop in his fridge, watch “Sanford and Son” with the volume cranked and eat dinner when he wants instead of being served at 4:45 p.m. every day.

“I don't like their schedules,” says Cicarelli. “I'm tired of that mess.”

As he and his father leave the courthouse and head to Jimmy Johns for lunch, Cicarelli sums up what this legal victory means for him. 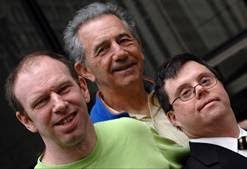