Twenty years ago I learned to refuse to play Scrabble with Fred Fay. 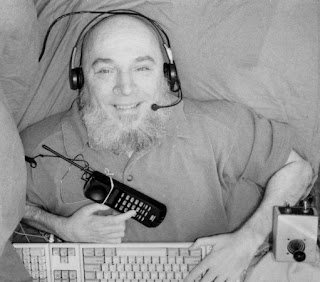 Fred knew all the two-letter words and was shameless about using them. Fred would clean the clock of anyone who took him on. And he did this while lying on his motorized wheel-bed, talking and smiling malevolently through a mirror tilted so he could see you and the board. He was a relentless competitor and that spirit led him to become one of the prime movers in the disability rights movement in the United States. From the White House to national organizations for people with disabilities, he received praise, honors and esteem. Fred died Saturday morning at the Main Street home he shared for 30 years with his beloved Trish Irons. And although he lived below the radar in Concord, he was a super star in the disability community throughout the United States.

An accomplished gymnast as a youth, Fred fell from a trapeze when he was 16 and lost the use of his legs. After a rough period of adjustment he built up muscles in his arms so that he could fold up his wheelchair, get into a car and drive. At home in D.C. Fred found “every single curb was like a Berlin Wall telling me that I was not welcome to travel farther than a block.”

At 17, he launched a disability advocacy career by co-founding Opening Doors, a counseling and information center in Washington, D.C. In 1963, Fred and his mother founded the Washington Architectural Barriers Project, which led the drive to make the D.C. subway system accessible to all.

When President Johnson invited Fred to the Rose Garden for the signing of the Urban Mass Transportation Act in 1964, his wheelchair had to be bumped up the steps. The White House was not accessible.

He received his bachelor’s, master’s and doctoral degrees from the University of Illinois, which at that time was the most accessible to wheelchairs. He determined that, not only would he live a full life, but others with mobility impairments would also.

Fred, a psychologist, worked for many years at Tufts New England Medical Center, until syringomyelia made it impossible for him to sit upright. As this condition progressed his ability to move his head and arms became limited and Fred’s home became a sci-fi wonder. An electronic workstation with computer screen was suspended over his bed, large mirrors covered the wall and ceiling. Ramps made it possible for him to enjoy the fresh air in his yard, and his motorized wheel-bed took him to his neighbor’s cookouts.

He was a pioneer in the development of assistive technology and his innovations have made the world more accessible to people with limited mobility. 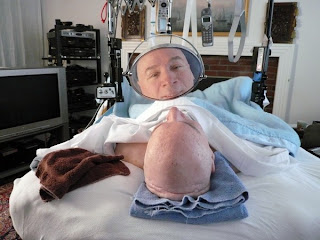 While recognition and awards kept piling up, Fred was active across the country ensuring equal rights for all people. Until he slowed down a few years ago, he lived on California time, the better to communicate with colleagues across the country.

In 1994, when Senator Kennedy was running for re-election, Kennedy’s nephew Michael, his field coordinator Lynda Tocci, and I worked the crowds at the Patriots’ Day parade, while the senator enjoyed coffee and a muffin with Fred.

Remember life before the Americans with Disabilities Act? If you were in a wheelchair or had any mobility issues, public places did not welcome you. You have Fred and his colleagues to thank for your ability to enter buildings. You have them to thank for the equal treatment of your child with a disability. Fred helped make the U.S. a better place for all of us.

Fred’s life is one of several being featured in a PBS documentary by Storyline Motion Pictures scheduled to be shown Oct. 27 on Independent Lens. Bedford’s Elmer Bartels, former commissioner of the Massachusetts Rehabilitation Commission, helped fund the project. You can check out Fred’s part on Youtube: Lives Worth Living, and with some scrolling find Elmer and Fred in conversation. Filmmaker Eric Neudel and associate producer Alison Gilkey have been working for years on the documentary. We all regret that Fred will not be on Main Street watching it.

the Fred Fey Story: A Tribute

[refresh if no video]
Uploaded by realeyezindependent on Aug 14, 2008

A short documentary about Fred Fay and his critical role in the Disability Rights Movement. Shot in HD, this short sample follows Fred from his injury in 1969 to the present. (Running Time: 7min 30sec) For more info on Fred Fey and the movement, check out the new PBS documentary "Lives Worth Living"

On October 27, PBS will air A Life Worth Living, a film about Fred's life and his role in the Disability Rights Movement, is scheduled to air on PBS on October 27.