Many health care advocates were arrested at a Senate building, including several disabled activists. 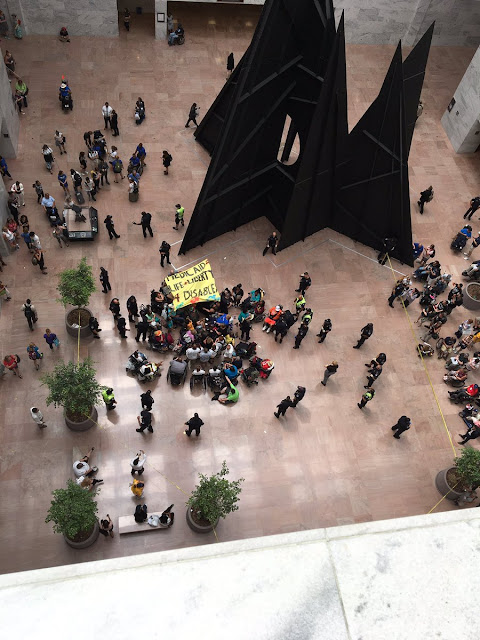 article by Kaeli Subberwal for HUFFPOST | July 25, 2017
Crowds of protesters flooded the atrium of the Hart Senate Office Building on Tuesday to protest efforts to repeal the Affordable Care Act, making the halls echo with now-familiar chants: “I’d rather go to jail than die of no Medicaid!” and “No cuts to Medicaid! Save our liberty!”

While the Senate prepared to vote on the bill, the line along the wheelchair ramp leading into the Hart Building snaked onto the sidewalk. Once protesters, representing groups including ADAPT, an organization of disability rights activists, and the National Council on Independent Living, entered the building, they gathered into a group and began their chants calling for Republicans to end their fight to repeal Obamacare.

Many of the protesters were in Washington for the annual conference of the National Council on Independent Living, which held a rally on the West Front Lawn of the Capitol earlier Tuesday.

Ashley Bridwell, a participant in the Hart Building protest, said that the benefits people with disabilities accrue from Medicaid are not luxuries.

“If the bill passes and Medicaid is cut by 30 percent, there are people in this room that will die as a result of the legislation and the cuts in the funding,” said Bridwell, who serves on the board of directors of a Phoenix-based center for independent livi

The consequences of a repeal are very real for protester Dina Garcia of Los Angeles. Garcia, her husband and their 11-year-old son would all be affected if Medicaid were cut. She vowed she would keep hounding Republicans to fight against the repeal.

“It’ll hurt so many people with disabilities,” Garcia said.

As the protesters continued chanting in the atrium of the Hart Building, a police officer raised a megaphone and warned them to desist or risk arrest. Slowly, protesters from the outskirts began to trickle away, and police officers formed a circle around the remaining crowd.

The police cordoned off the protesters with yellow police tape and began to arrest people one by one. Many of those arrested were in wheelchairs. As they progressed toward the door, each arrestee was heralded with applause; on their way out, many raised a hand in a victorious fist.

Sixty-four people were arrested, according to a press release from the United States Capitol Police.
Although the atmosphere at the Hart Building was one of defiance and determination, the Affordable Care Act that the protesters were fighting to protect faces its biggest challenge yet in the aftermath of Tuesday’s vote.

“It’s crazy,” Bridwell said, “that for the first time we’re actually talking about it in terms of life and death.”
http://www.huffingtonpost.com/entry/protesters-obamacare-repeal-senate_us_5977b667e4b0c95f375fa645
Posted by Jim Watkins at 9:40 PM