July 18, 2017 - The ADAPT protesters arrested after a nearly 58-hour sit-in at Sen. Cory Gardner’s Denver office, where they tried to pressure him to vote no on the Senate health care bill, on Tuesday entered not-guilty pleas. 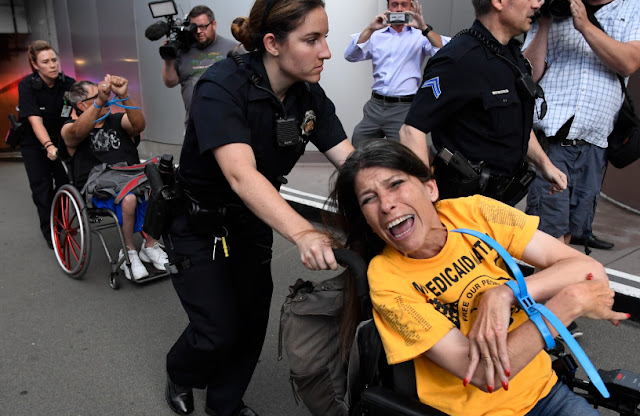 John Leyba, The Denver Post
ADAPT protesters Lonnie Smith, left, and Dawn Russell are wheeled out after getting arrested from Senator Corey Gardner’s office on June 29, 2017 downtown Denver. The protesters some in wheelchairs were taken out and loaded in to Denver Sheriffs vans to be processed. Protesters were chanting “Rather go to jail than to die without medicaid” and free our people”. / photo: John Leyba, The Denver Post
# # #

Nine of the protesters were arrested while still in the Republican’s office. Another was arrested while protesting downstairs. All were charged with trespassing while some had additional charges of interfering with police.

The protesters, many who have disabilities, entered Gardner’s waiting room the morning of June 27 and stayed there until police arrested them the evening of June 29. Gardner’s office initially allowed the protesters to stay, keeping staff on duty to assist them. Gardner’s staff eventually called Denver police, saying management of the office building at 17th and Lawrence streets told them the protest was in violation of Gardner’s lease.

ADAPT protesters were previously arrested in January on charges of trespassing while trying to access Gardner’s office, which is inside a privately owned building. Building management did not allow the group of 18 up the elevator to Gardner’s floor.

The group, working with the attorney David Lane, is fighting that arrest in court as well, arguing that the private entity violated the protesters’ First Amendment right to freely assemble and to petition the government for redress of grievances. 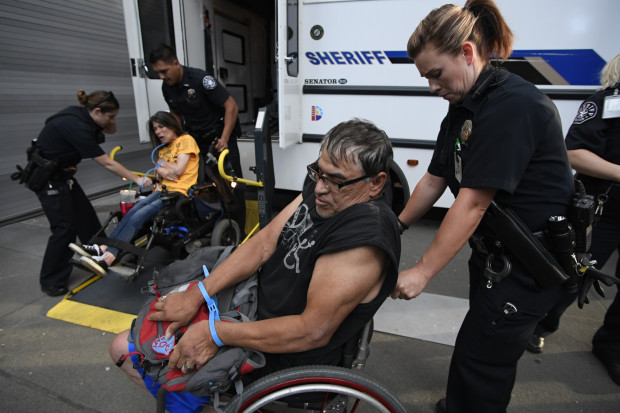 ADAPT protesters Dawn Russell, left, and Lonnie Smith are loaded into the Denver Sheriffs van after getting arrested from Senator Corey Gardner's office on June 29, 2017 downtown Denver. Protesters were chanting "Rather go to jail than to die without medicaid" and free our people". / photo: John Leyba, The Denver Post
Posted by Jim Watkins at 9:24 AM