Ed Roberts (January 23, 1939-March 14, 1995) was the first student with severe disabilities to attend the University of California, Berkeley. He was a pioneering leader of the disability rights movement. Roberts contracted polio at the age of fourteen in 1953, spending eighteen months in hospitals and returning home paralyzed from the neck down. 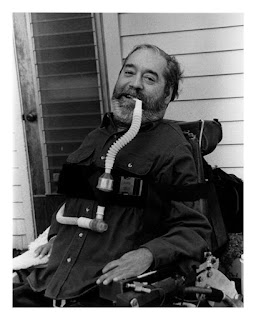 Determined to live with a positive personal sense of disability identity, his activism began when he returned to school and needed to fight to receive his high school diploma, continuing through his attendance at Berkeley where he paved the way for other students with severe disabilities, who joined him in his efforts to advocate for changes to their treatment and services.
He became the head of the Berkeley Center for Independent Living (CIL), the first independent living service and advocacy program run by and for people with disabilities. In 1976 California Governor Jerry Brown appointed him Director of the California Department of Rehabilitation, where he served until 1983. He returned to Berkeley and co-founded the World Institute on Disability.
# originally posted July 2013
Posted by Jim Watkins at 8:00 AM