ASBURY PARK, N.J. — Four months after she learned she had breast cancer, Jennifer Giordano still didn't feel comfortable walking around her husband and children — let alone strangers — without a wrap to cover her bald head. 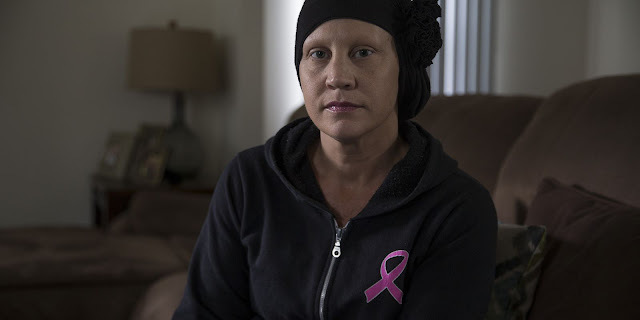 article by Steph Solis, Asbury Park (N.J.) Press | July 26, 2017
So when an employee at the Motor Vehicle Commission office in Eatontown refused to renew Giordano's license using an old photograph, she broke down sobbing. The employee insisted she remove her headscarf to take a new photograph, according to court documents.

"You have to take that thing off," Giordano, 40, of Brick, recalled the employee saying the afternoon of June 14.

Now Giordano is suing the New Jersey Motor Vehicle Commission, alleging the agency discriminated against her and caused her emotional distress, noting that state law allows people undergoing medical treatment to use their old photographs for new licenses.

Eventually, another employee intervened and produced Giordano's license with her old photo, but Giordano wants to see the agency review its policies and train employees on how to treat patrons with medical or religious exemptions.

"That would be like me telling you, 'Take your shirt off, take your bra off and just walk around,' " said Giordano, recalling how she felt. "It's like exposing yourself in a very raw way that's not necessary, and then to have that picture on my license for years."

"If you're going through a chemotherapy regimen that causes you to lose your hair, you shouldn't be made to feel that way by anybody, especially a state agency," Giordano added. "They're kind of held to a higher standard."

Giordano, who moved to Brick from Ocean Township last year, said she needed the updated license so she could register for classes at Ocean County College. She plans to pursue a career in nursing — all while raising three boys and battling breast cancer.

State law dictates that motorists whose physical appearances may change during medical treatment can renew their license using an old photo. The extension of the old photo requires documentation from a doctor and can't exceed a year from the license's expiration date.

Giordano later learned the agency also allows people wearing headscarves for medical or religious reasons to keep them on for their new photos.

"The treatment Jennifer received at the MVC was appalling and illegal," her attorneys Richard Schall and Patricia Barasch said in a statement. "Breast cancer is a disability under the law and the MVC should not have harassed our client in this way — especially when the remedy — to use her old photograph — existed."

It's not the first time a cancer patient faced hurdles at an MVC in New Jersey. Joanne Jodry of Neptune City said in October 2015 that she was not allowed to get her license renewed with an old photograph when she went to the Freehold office. They said she had to take new photo wearing her headscarf.

Chemotherapy patients often experience nausea, fatigue and hair loss, as well as trauma from losing one's hair, according to the American Cancer Society.

"The loss of hair can cause a substantial amount of stress for some, if not many," said Len Lichtenfeld, deputy chief medical officer for the American Cancer Society.

Giordano's blonde curls started falling out two weeks into her chemotherapy treatment. She bought a wig and eventually switched to wearing headscarves. She said losing her curls, which she considered part of her identity, became a constant reminder of her battle against cancer.

"In our society, hair is a big deal, and then just not having it anymore — it's a lot," she said.

Just a few weeks ago, she started walking around bald in her house.

"It's been four or five months that I had it and I just now started to get a little more comfortable around my husband and children," she said. "I certainly didn't want to stand at the DMV full of strangers and take it off when I wasn't even walking around my own home like that."

Giordano was in a room full of people when she was told to remove her headscarf.

After about 10 minutes, another employee took Giordano's paperwork and produced a new license using her old photo. She asked Giordano to take a seat while it printed.

People walked up to Giordano as she waited for her license. According to the lawsuit, a woman claimed she overheard the first employee say, "Can you believe that b—? Does she think she is the only person who ever had cancer?"

When a manager approached Giordano with the license, she explained the situation. The manager said their policy allows people with headscarves for medical or religious reasons, according to the lawsuit.

"Clearly, she doesn't know that," Giordano said, pointing to the first employee.

The experience has stuck with Giordano; she still breaks down when she recalls what happened. The lawsuit, she says, is the only way she could think to ensure the agency would train its employees to handle such situations better.

FOR  A VIDEO INTERVIEW WITH JENNIFER GIORDANO, VISIT:http://www.app.com/story/news/local/eatontown-asbury-park/2017/07/26/take-thing-off-cancer-patient-sues-over-treatment-mvc/507611001/
Posted by Jim Watkins at 8:17 AM

Email ThisBlogThis!Share to TwitterShare to FacebookShare to Pinterest
Labels: cancer