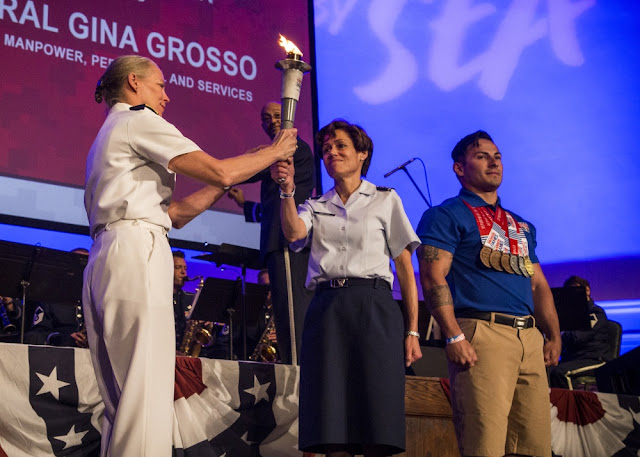 CHICAGO – The 2017 Department of Defense Warrior Games wrapped up July 8 after eight action-
packed days of competitions at venues throughout Chicago.
The games are an annual Paralympic-style event which brings together wounded, injured and ill service members and veterans from all U.S. military branches as well as teams representing the United Kingdom and Australian Defense Forces. The 2017 games were organized by the U.S. Navy and this year marked the first time the games took place in a host city instead of on a military facility. Warrior Games athletes got to compete within high-profile sports venues such as Soldier Field and the United Center.

“I think it’s a positive thing because you get the local city involved,” said Rodney Carson, the head track and field coach of Team Army. “I think in the opening ceremonies, all the way to the venues, I’m seeing more spectators.”

The games serve a vital purpose. They allow service members and veterans who, in some cases, have survived terrible circumstances, to come together as part of a team and show the world they can conquer the limitations placed in from of them.

“Honestly the biggest thing about the Warrior Games is focusing on perseverance, resilience and adaptability,” said Heather Carter, an Air Force veteran and gold medal winning competitor. “It’s really finding your new normal and focusing on the future and that there’s no limitations except the ones you mentally put on yourself.”

Organizers, coaches and athletes hope that the games continue to gain exposure and increased public support in coming years.

“If I could do anything to help get more sponsors to make sure this event continues in the future, that would be ideal,” said Christy Gardner, an Army veteran and Team Army gold medalist. “Adaptive sports have been so crucial to my rehab and recovery that I want everyone to have that opportunity, it really does make a difference,” she said.

This year’s Warrior Games saw more than 260 athletes competing in track, field, shooting, archery, swimming, cycling, sitting volleyball and wheelchair basketball. Participants in the games may later qualify to move on to the Invictus Games or the Paralympics.

Vice Adm. Mary Jackson, Commander, Navy Installations Command led the U.S. Navy effort to host the games this year. She said the warrior-athletes were the center of the events, and that each athlete and family member participating in Warrior Games was an affirmation of the power of the wounded warriors' legacy. Seven teams achieved more than 1,100 medals in the 93 events of the 2017 Warrior Games.

“Driven, accomplished, and tough athletes competing in world-class venues," is the way Jackson described the warrior-athletes. "You poured out your competitive spirit; your heart and soul,” she told them during the closing ceremony at the Navy Pier July 8.

Jackson handed the torch to Lt Gen. Gina Grosso, the U.S. Air Force lead who will spearhead the event next year. The 2018 Warrior Games will be held at the Air Force Academy in Colorado Springs, June 2-9.

"It's just a tremendous honor to be able to take the torch on behalf of the United States Air Force," said Grosso, the Air Force's deputy chief of staff for manpower, personnel and services. "You inspire all of us to be better warriors and citizens. And it's an honor to serve with you.
https://www.dvidshub.net/news/240518/warrior-games-2017-ends-torch-passed-air-force
This work, Warrior Games 2017 Ends, Torch is Passed to Air Force, is free of known copyright restrictions under U.S. copyright law.
Posted by Jim Watkins at 9:21 AM