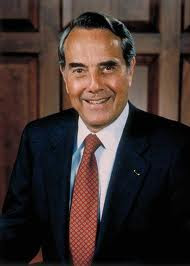 Aug 3, 2012 -- When I delivered my maiden speech on the Senate floor on April 14, 1969, the anniversary of the day I was wounded in World War II, it was customary to speak about something in which you had a deep interest, and something about which you could offer some leadership. I chose to speak about a minority group, as I said then, the existence of which affects every person in our society, and the very fiber of our nation.

It was an exceptional group I joined during World War II, which no one joins by personal choice. It is a group that neither respects nor discriminates by age, sex, wealth, education, skin color, religious beliefs, political party, power, or prestige. That group, Americans with disabilities, has grown in size ever since. So, therefore, has the importance of maintaining access for people with disabilities to mainstream American life, whether it is access to a job, an education, or registering to vote.

When we passed the Americans with Disabilities Act in 1990, it was not only one of the proudest moments of my career, it was a remarkable bipartisan achievement that made an impact on millions of Americans. The simple goal was to foster independence and dignity, and its reasonable accommodations enabled Americans with disabilities to contribute more readily to this great country.

Now, through the Convention on the Rights of Persons with Disabilities, or CRPD, we have an opportunity to advance the great American tradition of supporting the rights and inclusion of people with disabilities on a global basis. The United States supported approval of the CRPD in December 2006. On the anniversary of the ADA in 2009, the U.S. signed the CRPD. This landmark treaty requires countries around the world to affirm what are essentially core American values of equality, justice, and dignity. Now the package has been submitted to the Senate for its advice and consent. I am proud to support the CRPD and am hopeful the Senate will join together in a bipartisan way to ratify this treaty when members are back in Washington in early September.

U.S. ratification of the CRPD will improve physical, technological and communication access outside the U.S., thereby helping to ensure that Americans - particularly, many thousands of disabled American veterans - have equal opportunities to live, work, and travel abroad. The treaty comes at no cost to the United States. In fact, it will create a new global market for accessibility goods. An active U.S. presence in implementation of global disability rights will promote the market for devices such as wheelchairs, smart phones, and other new technologies engineered, made, and sold by U.S. corporations.

As with all treaties, the CRPD has detractors, among them some who question whether it will indirectly impinge upon our nation's sovereignty. This may well be true of ongoing United Nations efforts to impose gun control and abolish the death penalty, but the CRPD simply validates and affirms our country's global leadership in ending discrimination against persons with disabilities. In fact, one of the great strengths of the CRPD and the proposed "reservations, understandings, and declarations" that the Senate is considering is that U.S. sovereignty is expressly preserved. Because of this, and the strong laws at the federal and state levels on disability, no changes in U.S. law will be required to implement the treaty.

The CRPD works to extend protections pioneered in the U.S. to the more than one billion people with disabilities throughout the world. This is an opportunity for the U.S. to join its allies - including Australia, Canada, France, Mexico, South Korea, the United Kingdom and Germany - in continuing our historical leadership on disability rights.

Passage of the ADA constituted a proud moment in U.S. history, when we joined together as a nation to stand up for a worthy cause. Now is the time to reaffirm the common goals of equality, access, and inclusion for Americans with disabilities - both when those affected are in the United States and outside of our country's borders.

Bob Dole, a former Senate majority leader, was the Republican candidate for president in 1996. This article is adapted from his written testimony before the Senate Foreign Relations Committee on July 12, 2012.