Honoring the Legacies of Olmstead and Justin Dart

the National Council on Disability (NCD) published article, and it is our pleasure sharing ...
# originally posted here June 2013. If any links not working, please let know TY. 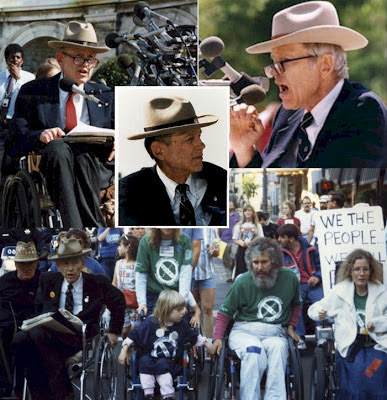 On June 22, 1999, the Supreme Court issued its landmark decision “Olmstead v. L.C.”, changing the lives of Lois Curtis and Elaine Wilson, who had been confined to a Georgia institution for several years after their initial treatment had ended. Lois and Elaine filed suit under the Americans with Disabilities Act (ADA) for release from the facility and affirmation of their constitutional rights to self-determination. The ruling resolved in their favor, paving the way for other Americans with disabilities to live outside of institutions, and integrated into their community in order to live fuller and more productive lives.

How significant was the decision? For Americans with disabilities, Olmstead is comparable to Brown v. Board of Education, a landmark Supreme Court decision in which the Court declared state laws establishing segregated public schools were unconstitutional, memorializing the judgment that separate is inherently unequal, and galvanizing integrated education reforms that have forever changed American society.

“From one came much,” disability rights pioneer Justin Dart declared. Mr. Dart passed away exactly three years after the Olmstead decision was issued, at the age of 71. His declaration aptly describes the influence of Olmstead on the lives of millions of Americans with disabilities.

Justin Dart was instrumental in the enactment of the ADA during his tenure as the Vice Chair of the National Council on Disability (NCD). During the last year, in reliance on, and to further the ADA, the Olmstead decision, and Justin Dart's legacy, NCD has called for the gradual phased elimination of sheltered workshops, which segregate disabled workers and pay less than minimum wages (sometimes shockingly low wages which amount to mere pennies per week). The issue has received unprecedented national media and advocacy attention, supporting corrective reforms that reflect equal pay, rights and dignity for workers with disabilities.

NCD also produced a Deinstitutionalization Toolkit, to facilitate community living opportunities. The toolkit contains information and guidance to help build capacity to serve more people with intellectual and/or developmental disabilities as they move out of institutional settings and into the community.

Most recently, NCD encouraged the U.S. Department of Housing and Urban Development (HUD) to issue long-awaited guidance to assist states in meeting their obligations under Olmstead, and fulfillment of the integration mandate of the ADA. HUD issued its recommendations on June 13, 2013.

As courts continue to apply and interpret the Olmstead decision, NCD will continue to make recommendations to policymakers regarding meaningful compliance with the Olmstead decision and to explore and assist with means to implement further policies that expand home and community-based services that will protect the most vulnerable in the disability community while providing opportunities for full integration into the fabric of American society.

Since the Olmstead ruling, much progress has been made. Countless individuals have successfully transitioned to community settings – “their homes, not nursing homes,” the rallying cry of so many advocates and professionals in this field, but Justin Dart’s call for a revolution to “empower every single human being to govern his or her life, to govern this society, and to be fully productive of life equality for self and for all” has yet to be completely fulfilled.

From the stirring leadership of Justin Dart to the legacy of the Olmstead decision, there is much in our history to be proud of, and to inspire our work together to build a more inclusive future for all Americans, including the 57 million Americans who live with the challenges of disabilities and strive to be part of the American dream.

NCD is proud to be part of the broad inclusive community working to ensure fulfillment of the ADA, and to honor the memory of Justin Dart as the nation celebrates the anniversary of the watershed Olmstead decision.

On behalf of the National Council on Disability,

For the National Council on Disability (NCD): CLICK HERE
Posted by Jim Watkins at 7:30 AM