ESPN announced it will honor Special Olympics founder Eunice Kennedy Shriver with the Arthur Ashe Courage Award. This is the fifth time in the ceremony’s 24-year history that the award, dedicated “to individuals whose contributions transcend sports,” will be awarded posthumously. 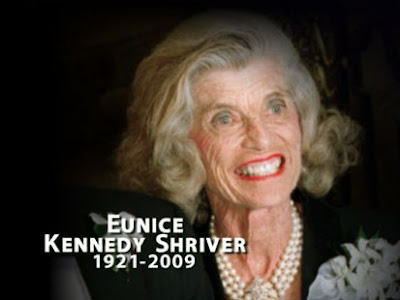 “Eunice Kennedy Shriver dedicated her life to championing the rights and acceptance of people with intellectual disabilities,” the network said in a statement on Tuesday. “Her legacy lives on through Special Olympics, the global movement she founded in 1968 that harnesses the transformative power of sports to empower individuals with intellectual disabilities to become accepted and celebrated members of society.” 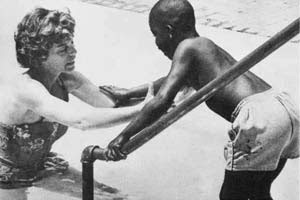 Shriver’s son Timothy, who serves as the chairman of the Special Olympics, will attend the ceremony to accept the award on his mother’s behalf.

“My mother … was a visionary, but, more importantly, a revolutionary,” Timothy Shriver said in a statement. “Fueled by love and anger, she used sport to break down the barriers, she used fields of play to bring people together, and she opened the doors of inclusion and equality to the most marginalized on earth. It is now up to all of us to follow the athletes of Special Olympics who can teach us all to accept and include each other.”

Eunice Kennedy Shriver, who died in 2009, grew up with eight siblings, including former president John F. Kennedy and former Sens. Ted and Robert Kennedy. It was her sister, Rosemary — who was born with intellectual disabilities made worse by a failed lobotomy — who inspired Shriver’s life work.

“Rosemary’s talents and gifts made Shriver acutely aware of all that people with intellectual disabilities have to offer, but she recognized early on that there were limited programs and options for people like her sister,” ESPN stated.

The two often bonded over sports, which eventually inspired Shriver to create what started as a summer day camp in 1962 and eventually evolved into the Special Olympics six years later. Today, roughly 5.3 million athletes from more than 170 countries take part in the more than 108,000 Special Olympics events.

Besides her son Timothy, Shriver’s daughter Maria and former son-in-law Arnold Schwarzenegger are also heavily involved with the Special Olympics.

“The effort that Eunice Kennedy Shriver and her family have been displaying for these past five decades is truly remarkable,” ESPYS executive producer Maura Mandt said in a statement. “We are honored to celebrate Eunice’s work and the bravery of the athletes of Special Olympics, whose efforts and performances are as inspiring as any of those we celebrate on this show. It’s stories like this one that show what the The ESPYS are really about.”

Last year, ESPN used the award to posthumously honor 15-year-old high school football player Zaevion Dobson, who used his body as a shield to save two younger girls from a random drive-by shooting.

Before that ESPN awarded the Arthur Ashe Courage Award posthumously to Ed Thomas in 2010, a year after he was shot and killed in the team’s locker room by a former player; Pat Tillman in 2003 after the former NFL player was killed by friendly fire in Afghanistan; Todd Beamer, Mark Bingham, Tom Burnett and Jeremy Glick in 2002, after the former athletes died trying to fight off terrorist attackers on Flight 93 on Sept. 11, 2001; and William David Sanders in 2000 after the teacher and high school coach was shot while helping students flee an onslaught of gunfire during the mass shooting at Columbine High School in 1999.

The ESPYs, which will be hosted by Peyton Manning, air July 12 on ABC.
https://www.washingtonpost.com/news/early-lead/wp/2017/06/06/espys-to-honor-special-olympics-founder-eunice-kennedy-shriver-with-posthumous-courage-award/?utm_term=.3fd81f37e39e
Posted by Jim Watkins at 9:04 AM