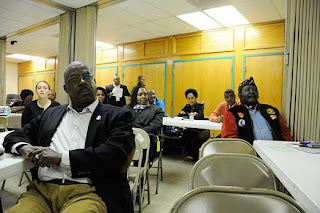 [photo: Veterans of all ages came to hear the VA Committee on Minority Veterans at a town hall meeting Wednesday. Esther Bergdahl/MEDILL]

The frustration resulting from the claims backlog many veterans face in getting disability benefits was brought to life at a Department of Veterans Affairs town hall meeting in Chicago this week.

Veterans and administrators both expressed frustrations with the VA at the meeting for minority veterans, each side wishing the department could expand and improve services for aging and vulnerable veterans and their spouses.

Members of the VA Advisory Committee on Minority Veterans joined local and regional VA staff members and administrators at St. Luke Church of God in Christ in the near North Side on Wednesday to discuss individual benefits claims, answer questions about the VA system and hear suggestions on how to improve service.

“It wasn't that minorities were being discriminated against, that's not what we're talking about,” said Earl Newsome, deputy director of the Center for Minority Veterans, of his program’s origins. “What we found was, and we're still finding it, is that minority veterans and poor veterans and sometimes a combination of each aren't aware of their benefits and services.”

Many attendees spoke about the disability claims process, and the amount of paperwork required to file and verify a claim. The VA is currently facing a backlog of disability claims that prevents many veterans from receiving medical treatment through the VA health care system. Some veterans report waiting hundreds of days for a claim to be processed.

The amount of paperwork and follow-up appointments required to establish a claim is a major feature of veteran complaints.

“Based on what the veteran submits, the VA has the duty to assist,” said Steven Novak, staff attorney at the John Marshall Law School Veterans Legal Support Center and Clinic. The VA is required to look at a veteran’s VA medical records, their service medical record and other files during the evaluation process, he said.

Duane Honeycutt, director of the Chicago Regional Office of the VA, said during the town hall meeting that many Vietnam-era veterans are starting to claim disability for symptoms that may be related to either service or aging. He also said that many veterans fail to show up for appointments or provide proper paperwork, which extends the time a disability claim is under review.

Tara Mills, an army veteran, came to ask why the VA did not provide dental care for veterans. “They said how can they better serve, that's what I'm hoping they'll take away. That's an area they can better serve veterans,” she said.

Despite the sometimes fraught topics addressed, many attendees were pleased with the exchanges they had during the meeting.

Robert Graham, an army veteran, came on behalf of his local chapter of the Disabled American Veterans. During the meeting he asked why so many veteran resource centers were on the outskirts of Chicago, rather than in the inner city neighborhoods.

“What I was really trying to find out is what they were here looking for, what they were doing, and it cleared up quite a few questions for me. I got a pretty good understanding of it,” he said.

“I didn't think there was anybody held back asking questions, what they wanted to ask,” said Honeycutt. “I think they got a lot of accurate information that cleared up a lot of misconceptions in their mind.”

Retired Army Brig. Gen. Oscar Hilman, who chairs the committee, was glad to hear from Chicago-area veterans. “This is the heart of what we do,” he said. “I'm a veteran, my father's a veteran, so this is a good forum.”

Whether the forum’s feedback will help make the disability claims process more transparent is another story.

“I know for veteran service organizations, like the VFW, the American Legion, there are certain numbers of those agencies that have offices within [VA] centers,” said Novak. That cooperation can help make claims processing run more smoothly, he said. “For outside attorneys, for us, for vets not working with VSOs, it's very, very opaque.”