Pres Obama Social Security proposal - How would it affect you?

'Chained CPI,' a leading idea for how to keep Social Security solvent for the decades ahead, is part of President Obama's budget proposal. Here's what it would mean for benefits.

Nothing else in President Obama’s new budget plan has stirred controversy like this idea: changing the gauge of inflation so that Social Security benefits don't rise as much each year.

Many fellow Democrats and groups including AARP have been quick to reject this plan.
Mr. Obama himself has only half endorsed it.

“While it’s not my ideal plan to further reduce the deficit, it’s a compromise I’m willing to accept,” he said Saturday in his video address, referring to this and other elements in the budget that are designed to show a good-faith willingness to bargain with Republicans on the thorny issue of entitlement reform.

Maybe this inflation change in benefits will never happen. But it’s also true that the “chained Consumer Price Index,” as the proposed inflation measure is known, is among a handful of leading ideas for keeping Social Security solvent for the decades ahead.

Opponents of the chained CPI can proclaim it “dead on arrival,” but that doesn’t make it so – at least not until some other fixes gain ascendancy. 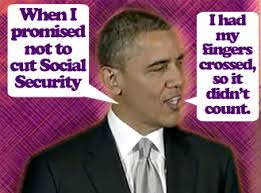 What if the change happened?

Here’s a glimpse of what it might mean for US retirees.

The chained CPI, an alternative measure of inflation tracked by the US Labor Department, has generally risen about one-quarter of a percentage point slower than the department’s regular CPI over the past decade.

That fraction of a percentage point makes a difference, over time, in a benefit like Social Security that's adjusted for the cost of living. Consider the average Social Security benefit, about $14,800 per year in 2012. Stepped up at 2 percent per year, this benefit would grow to $18,000 within 10 years. If boosted by 1.75 percent a year, the payout after 10 years would be about $400 smaller.

IS THAT REALLY A BENEFIT CUT?

Obama's proposal comes with "protections" designed to cushion the impact. More on that in a moment.
Also, where opponents call this a benefit cut, some finance experts say that’s faulty logic, arguing that the chained CPI is simply a more accurate way of measuring changes in living costs.

“Some commentators portray this proposal as a test of fiscal rectitude,” while others say it should be rejected as imposing “serious hardship on seniors with modest incomes,” policy expert Robert Greenstein said this week in an analysis of the issue. “I’m not comfortable with either position.”

His take, as head of the liberal Center on Budget and Policy Priorities, is that adopting the chained CPI shouldn’t be ruled out but also shouldn’t be viewed as a pain-free reform.

The chained CPI goes up more slowly than the regular CPI partly because it takes consumer buying habits into greater account. In other words, it focuses more on how, when prices rise faster for one item than another, consumers will buy less of the first and more of the second.

Greenstein argues that the chained CPI is still worth considering, as long as it’s accompanied by companion measures to ease the impact on the very old (who use the most health care) and as long as it’s part of a broad program to control the national debt without shortchanging other priorities like investments that help the economy.

Obama himself has laid out similar conditions. The White House says he’s open to the switch only if it is combined with measures to protect the vulnerable and is part of “a balanced deficit reduction package” that includes fresh tax revenue.

Obama’s budget, released Wednesday, would offer a “benefit enhancement” to older beneficiaries, designed to cushion the adverse impact of the CPI change.

The benefit enhancements would begin in 2020, for those over age 76 or, for disability-insurance beneficiaries, after 15 years on Social Security.

The adjustment would amount to a benefit boost of about 5 percent, phased in over 10 years, from what would otherwise occur. (Even with the enhancement, the federal government saves money because the beneficiaries would have the lower cost-of-living adjustments prior to age 76.)

“Beneficiaries who continued to be on the program for an additional 10 years would be eligible for a second benefit enhancement, starting at age 95,” the White House Office of Management and Budget says.
The White House budget team estimates that the inflation change, coupled with these protections, “would not increase the poverty rate for Social Security beneficiaries.”

DOES SOCIAL SECURITY REALLY NEED TO BE CHANGED?

Whether or not Congress adopts the shift to a chained CPI, Social Security would ultimately require some other adjustments to remain solvent, either in the form of higher tax revenue or downscaled benefits, finance experts say. This is because the revenue from the program’s current payroll tax (along with its trust-fund assets) isn’t enough to match projected costs as the ranks of retirees grow.

Here's a sense of the magnitude of the changes needed. The Congressional Budget Office estimates that “payroll taxes could be increased immediately by 1.9 percent of taxable payroll and kept at that higher rate, scheduled benefits could be reduced by an equivalent amount,” or some equivalent combination of adjustments could be made to bring the program into balance for the long term.

Some other options for Social Security include having the eligibility age gradually rise, raising payroll taxes on the rich or on all workers, or making benefits less generous for high-income retirees.

RECOMMENDED: How much do you know about US entitlement programs?
Take the QUIZ.