Illinois Fails to Protect the Most Vulnerable; Serving disabled adults a growing concern in McHenry County

Most adults have their own place by the time they are 27 years old, and Sean Gohl wants nothing more than to move out of his parents’ Wonder Lake home.

But there are two obstacles preventing his independence: He has cerebral palsy requiring daily assistance, and a lack of local group homes that could provide those services has forced him onto an ever-growing waiting list.

Adding to the issue are his aging parents, Ronald and Trudie Gohl, who fear a time is approaching when they no longer will be able to care for their developmentally disabled son.

“You never envision putting your child in a home, but when you get older, you realize you can’t keep doing it and it is no longer fair to them,” said Ronald Gohl, 75. “He wants to be on his own like his brothers and sisters, and has been waiting for that chance for more than five years.”

The state continually ranks near the bottom nationally in funding for people with intellectual and developmental disabilities – a problem that has tightened budgets of local agencies scrambling to provide more with less.

According to the most recent State of the States in Developmental Disabilities report, an annual ranking of the states by the University of Colorado and University of Illinois at Chicago, Illinois ranks 42nd in spending.

“Observations from the data we have collected for more than 30 years show that Illinois has never prioritized support for people with developmental disabilities and their families, period,” University of Colorado professor David Braddock said. “The cumulative effect from that has led to a service-delivery system that is starved for resources to serve those people in need.”

Consequently, Braddock recommends a statewide summit where solutions are identified over one-, three-, five- and 10-year periods.

“The fundamental problem is a lack of prioritization,” he said. “There needs to be other sources of resources identified.”

The county has more than 5,000 residents with developmental disabilities, according to 2010 Census data. About 935 of those residents are receiving group-home placement, respite and home-based services, as well as other support.

The statewide waiting list for parents and caregivers seeking assistance in caring for the disabled also has reached more than 22,500, according to the Prioritization of Urgency of Need for Services database. 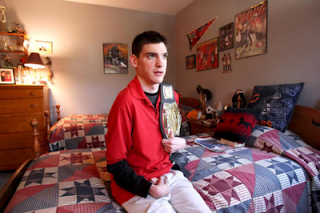 [photo: Thousands of Illinois residents feel the sting of debt every day; no one less than the special needs community, the elderly, the mentally handicapped, and the physically disabled. An estimated 2.8 Billion dollars are owed to the Human Service department charged with caring for those who cannot care for themselves.]

To receive funding for residential services, a disabled adult must meet state crisis criteria, which includes having become homeless, having been abused or neglected, or having incurred a complete loss of caregivers or parents.

Before reaching adulthood, early intervention is offered to anyone under age 3 with a delay in development.

Those children often receive the appropriate intervention, and are able to enter the school system, said Cindy Sullivan, executive director of Options and Advocacy for McHenry County, which has 550 children in its early intervention program.

Adolescents and teens with lifelong disabilities, such as autism, cerebral palsy and Down syndrome, are eligible for special education through local school districts, which ends when they reach the age of 22.

Once developmentally disabled children reach that age, that is when things begin to fall apart, Sullivan said.

“They graduate to nothing because there are no state mandates,” she said. “If you get lucky, you get pulled from the state database, and it is like winning the lottery.”

Eighteen local residents recently were pulled from the database and selected to receive placement, but there are no vacancies in any of the 12 group homes, Sullivan added.

“They’ve hit the jackpot, but we have no place to put them,” she said. “We need more group homes in McHenry County.”

The Pioneer Center for Human Services operates several group homes for the developmentally disabled and works with Options and Advocacy for Placement.

When Executive Director Patrick Maynard took over at Pioneer Center more than a year ago, the nonprofit agency was owed more than $4 million from the state as part of a $14 million budget.

That forced the organization to spend down its reserves to three and a half weeks remaining. The state still owes Pioneer Center about $3 million.

“The state’s level of reimbursement rate hasn’t increased for more than six years,” Maynard said. “Everything else has gone up, and many of our peers are in dire straits. We have to find money elsewhere.”

The lack of state funding also has created a competition among similar organizations, Maynard said.

“Everyone is very aggressive in trying to find more resources,” he said. “Organizations are failing to provide quality services, and if all of a sudden you have to chase dollars to survive, you may chase dollars that are outside of your mission.”