When taking the survey, there was no way for Seniors to identify their needs for safe transit. People with Disabilities were not even a thought as the Survey demonstrated.
----
CTA is asking for rider opinion on rail car seating arrangements as it gathers information before selecting a manufacturer for the upcoming 7000-series cars.

In a survey e-mailed to some CTA riders this week, the agency asks riders to weigh in on whether they prefer the aisle-facing seats on the new 5000-series rail cars to the standard seating on the older rail cars on the Brown and Blue lines.

The CTA also asks riders whether they would rather see the aisle-facing cloth seats on the 5000-series cars or plastic bench seats featured in New York City subway cars.

Riders also are asked how they prefer to steady themselves when standing: by leaning against the train, or holding onto a pole, hanging straps or the back of a rider's seat.

"The survey is one part of the research we’re doing. We’re also studying how passengers board and alight and how they move within the cars once they’re on board," CTA spokeswoman Tammy Chase said. This information will help the CTA in making choices about the 7000-series cars, Chase said.

The 5000-series cars with the aisle-facing seats have sparked mixed feelings from CTA riders, some of whom say the seats are too narrow, especially when carrying bags or purses. The cars are on the Red, Green and Pink lines.
---
For the CTA Riders Survey for Train Design: CLICK HERE 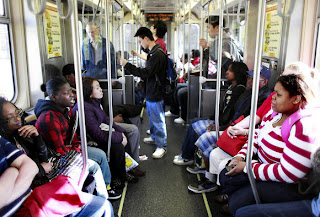