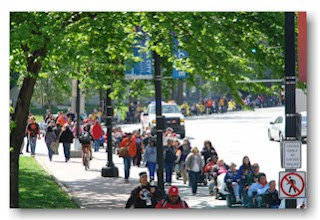 as posted and shared by Adapt.

ADAPT used direct action successfully today at the Department of Housing and Urban Development and the unions SEIU and AFSCME. ADAPT secured a commitment for nationwide guidance from HUD on compliance with Olmstead and both unions agreed to meet with ADAPT about the proposed rules to modify the companionship exemption.

Jennifer Ho, a new senior advisor, is commissioned to write a HUD statement on Olmstead. Her letter to ADAPT outlines many things that still must be done before the guidance is release; however, she is committed to have the Olmstead advisement complete by May 27, 2013. Jennifer Ho will meet with ADAPT ten days before the deadline.

"As states facilitate the transition of persons with disabilities from institutional or other segregated settings into their communities," said Jennifer Ho in the letter to ADAPT; "the need for meaningful choice among housing options is critical."

ADAPT followed up this success by bringing the Service Employee International Union and the American Federation of State, County and Municipal Employees back to the negotiating table. The US Department of Labor has skirted a law that requires they include people with disabilities in writing new rules about Medicaid services including the companionship exemption. ADAPT was able to confront the two unions on being shut out, but both walked out and refused to talk any further with ADAPT.

"This agreement to meet again within two weeks and bring substantive proposals for movement toward compromise was a huge win for ADAPT and people who rely on home-based attendant care today," said Mike Oxford of Kansas ADAPT.

The Department of Labor had done an assessment of the proposed companionship exemption rule and found that it would cause increased institutionalization. The sad fact is that means that some people who can now live in their own home will be forced into expensive institutions. That is an unacceptable human cost. 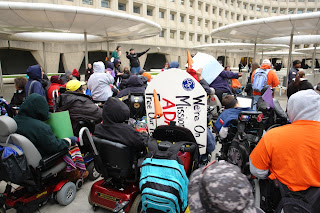 "We don't oppose our attendants receiving improved pay and benefits, in fact, we support it," added David Wittie, an organizer for ADAPT of Texas. "And today's new agreements will go a long way toward securing higher take-home pay for our workers while also protecting the right of folks with disabilities to control who comes in our homes and assists us with the most intimate activities of daily life, all while ensuring that we stay out of costly institutions.

ADAPT works hard to bring integration and an end to the institutional bias nationwide. The meetings, letters, lawsuits and information that ADAPT creates on our campaign is often eclipsed by the direct action that ADAPT is known for. Action is what got ADAPT to the table in the first place and this week's action has secured our place in the negotiations. It was clear that the unions had believe their bureaucratic maneuvering had shut out people with disabilities from the discussion making our negotiations difficult and essential.

"Negotiations were tough," said Mike Oxford. "The reason it was hard is because they started out denying how the meeting went earlier this week. They denied they refused to meet and come to the table; they denied refusing to negotiate with us over the rules; they denied that they refused to work on a compromise proposal and so on. So we had to get past all of that and then they started agreeing to meet and they agreed to work on substantive issues and to work towards a positive solution to the problems."

Original post and more information from Adapt at: http://www.adapt.org/freeourpeople/2013/report04.php