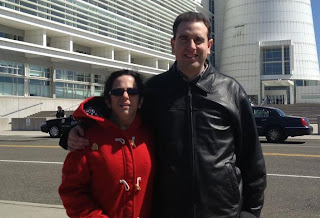 PORT JEFFERSON, N.Y. (CBSNewYork) — A Long Island couple engaged to be married this weekend are hoping to live together, but they’re facing regulations that won’t let them.

This Sunday, 35-year-old Hava Samuels and 29-year-old Paul Forziano will be bride and groom.

Samuels said she feels good about it, while Forziano added, “We are going to be together all the time.”

Samuels, who has her wedding gown ready, is developmentally disabled, just like her fiancé. They live in separate group homes in Suffolk County, and all four parents, who are guardians, have signed off on the marriage.

“As individuals, they have a loving relationship,” said Norman Samuels, the father of the bride.

But Norman Samuels said neither group home will allow them to share a residence, because, he said, they are not independent enough. They need some supervision.

“We’re not gonna live forever, and we don’t have other family to take care of them after we’re gone,” said Frank Forziano, the groom’s father.

Independent Group Home Living and Maryhaven Center for Hope, homes to Paul Forziano and Hava Samuels, respectively, would not comment for this story.

An attorney for the four parents has filed a federal suit. He said the two homes, which receive state money, are discriminating against the couple based on their disabilities.

“My feeling personally is they’re afraid of the unknown. They don’t want the hassle,” Martin Coleman said, adding when asked if the homes can accommodate the couple, “Easily.”

In this case the living arrangements may be decided by a federal judge.

The families’ attorney said there are at least two other group homes in that part of Suffolk County that do make provisions for married residents.