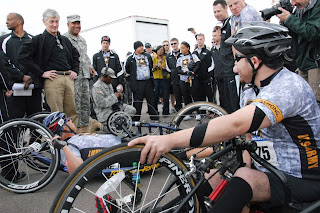 The 2013 Warrior Games presented by Deloitte will be held in Colorado Springs, Colo., May 11-16, 2013. In addition to Deloitte, the presenting sponsor, the week-long event is also supported by the Department of Defense, Department of Veterans Affairs, BP, USO, Fisher House Foundation and the Bob Woodruff Foundation.

More than 200 wounded, ill and injured service members and veterans are expected to participate in 2013. They will comprise five U.S. teams representing the Army, Marine Corps, Navy/Coast Guard, Air Force and Special Operations, as well as one international team from the U.K. Teams will compete in seven sports including archery, cycling, shooting, sitting-volleyball, swimming, track and field and wheelchair basketball.

"We are proud to host the Warrior Games at the U.S. Olympic Training Center and the Air Force Academy,” said Charlie Huebner, USOC Chief of Paralympics. “Paralympic sport has a tremendously positive impact on individuals with physical disabilities, and the Warrior Games allow us to salute these fine young men and women who have served their countries honorably.”

Admission to Warrior Games competitions is free and open to the public. The Opening and Closing Ceremony are invitation-only.

Prince Harry will attend the 2013 Warrior Games presented by Deloitte, St James’s Palace announced this week. The Warrior Games, an event hosted by the United States Olympic Committee, is May 11-16 at the U.S. Olympic Training Center and United States Air Force Academy in Colorado Springs, Colo.

“We are excited that Prince Harry will be attending the fourth annual Warrior Games presented by Deloitte,” said USOC Chief of Paralympics Charlie Huebner. “The United States Olympic Committee and the Royal Foundation have been working together since last year on our shared mission to develop sustainable community programs in both the U.S. and the U.K. for people with physical disabilities, including our wounded veterans and service members. Prince Harry is personally committed to help expand these programs, and we are honored to have him participate in the event.”

Approximately 260 wounded, ill, and injured service members and veterans will compete in seven sports over the six-day competition. Five U.S. teams will compete, with athletes representing each branch of the U.S. Armed Forces, as well as a sixth team from the United Kingdom - the British Armed Forces.

Competition is free and open to the public, while the Opening and Closing Ceremony are invitation only.

In addition to Deloitte, the presenting sponsor, the six-day event is also supported by the Department of Defense, Department of Veterans Affairs, USO, Fisher House Foundation, AT&T, BP, Budweiser and the Semper Fi Fund.

For more on the Warrior Games, visit teamusa.org/WarriorGames/.