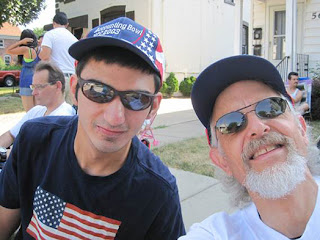 [photo: David Gould (left) has been on the PUNS waiting list for his developmental disability since about 2007. David's father, Jim, worries about David's care after he turns 22. Photo courtesy of Jim Gould]

Illinois caregivers and parents of developmentally disabled children face an average 10-year wait time to receive state services. A petition is circulating in Kane County looking to raise property taxes to collect millions for a county that’s struggling to keep up with demand.

Jim Gould of Carpentersville, Ill., said he is worried about his son’s 22nd birthday. Gould’s adopted son is developmentally disabled. David, 20, is scheduled to graduate from high school by then—and no longer would qualify for automatic state-assisted services.

David Gould has the mental capacity of a 3- to 5-year-old, his father said. He cannot live independently, cannot verbally communicate and will require 24-hour supervision for the rest of his life, Jim Gould said.

“David gets fabulous services from his high school,” Jim Gould said. “He gets transportation, job training, speech therapy through his education plan. But, the day he turns 22, all of that ends.”

Jim Gould said he placed his son on the state of Illinois’ Prioritization for Urgency of Need for Services, list about 2007, anticipating a long wait. The XXXXX worries about the future of his son’s care as Jim Gould and his ex-wife take turns supervising their son.

The PUNS list currently has 20,000 names statewide. About 1,900 families in Kane and Kendall counties are on that list, according to the DayOneNetwork, a disability advocacy group, headquartered in Geneva, Ill.

Recently, 65 percent of the voters in McHenry County voted down an initiative to raise property taxes up to .1 percent—an average of $61 for a $200,000 home. The initiative would also create a health council called a 377 Mental Health Board that would allocate funds and oversee services for residents with developmental and intellectual disabilities.

Fourteen of Illinois’ 102 counties have 377 boards. Illinois sits as the 47th state with the lowest spending on services for the disabled, according to the United Cerebral Palsy 2012 report.

Vocal opponent to the McHenry initiative Andrew Gasser, a Republican precinct committeeman from Fox River Grove, who could not be reached for comment, sent out a robocall to McHenry voters shortly before the April 9 vote.

“We live in the 29th most expensive county in the nation, yet the political class wants more,” the recording said. “Why should we continue to tighten our belts to live within our means while they use our homes as personal ATM machines?”

According to Lynn O’Shea, executive director of the Association for Individual Development, Kane County petitioners have about 14,000 signatures of the 18,000 required collected for their initiative for a March 2014 ballot.

“There are over 16,000 special education students in Kane County right now, O’Shea said. “We have another 800 youngsters, who are in early intervention programs. So we now, in the next 12 years, have 17,000 more people coming out of the public school system.

“Say half need some kind of help, they’re facing a system that already has a waiting list. That’s why we’re doing this. We don’t see a choice. The problem is so compelling.”

O’Shea said they have time to educate voters about the potential $13 million to $14 million to be raised. Without it, O’Shea and Gould said, there simply will not be services available for numerous families.

Instead, taxpayers are willing to accept higher taxes on things such as cigarettes, gas and alcohol, Brunori said. Unless the hike in property taxes relates directly to their home values, he said, it’s unlikely to pass.

“Since 1949, every year, it’s voted the most hated tax in the country,” Brunori said.