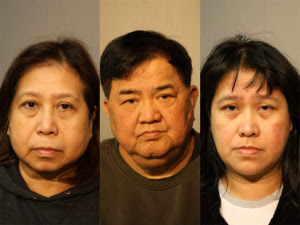 [photo: Carmelita Pasamba (left), her husband Edgardo Pasamba (center) and her sister Jocelyn Varga Baker (right) are accused of stealing $350,000 from an elderly dementia patient for whom Carmelita Pasamba was working as an in-home caregiver. (Credit: Cook County State’s Attorney)]

CHICAGO (STMW)  | April 2013 – A 94-year-old retired city engineer diagnosed with dementia was bilked out of $350,000 by a nursing assistant who rehabbed her home, gave money to family members, and bought herself a Mercedes-Benz with his money, according to prosecutors.

The victim now lives in a nursing home in Chicago, according to a release from the Cook County State’s Attorney’s office.

Carmelita Pasamba of Chicago is a certified nursing assistant who worked at St. Joseph Hospital from February 1996 to September 2011, according to court records. She came to the United States on a visitor/working visa from the Philippines in 1977, but is not a U.S. citizen and never received an extension for her visa, the state’s attorney’s office said.

The victim, who never married, owned a condo in Chicago and had investments in stocks, bonds, money markets and annuities, according to prosecutors. In March 2007, he was diagnosed with dementia, and from that point forward, lacked the capacity to sign legal documents or participate in financial transactions.

According to prosecutors, in January 2008, he was hospitalized at St. Joseph, where Carmelita Pasamba worked on his floor and she cared for him. After his discharge from the hospital, he required in-home assistance and Pasamba offered to work for him, prosecutors said. She became his in-home caregiver, subsequently hiring her daughter, as well as her sister, Baker, to assist in providing 24-hour care.

In April 2008, Pasamba asked an attorney to draft a power of attorney and change the victim’s estate planning documents to give her complete control over the victim’s assets, and name her husband as executor. It named Carmelita Pasamba, her family and charities affiliated with the attorney as the main beneficiaries upon the victim’s death, according to the state’s attorney’s office.

According to court records, between January 2008 and July 2011, Carmelita Pasamba spent more than $250,000 of the victim’s money on herself and her family, giving loans to herself and family members which were never paid back, purchasing new furniture, rehabbing her home, buying new electronics and a new Mercedes-Benz.

Between May 2008 and October 2009, she allegedly used the victim’s money and “loaned” and gave cash advances and “gifts” totaling $51,000 to Baker, which Baker never paid back. She also hired her husband to be the victim’s driver. In April 2009, the victim purportedly sold his 2000 Buick to Edgardo Pasamba for $2,000, court records said. He never paid.

In total, Carmelita Pasamba spent approximately $350,000 of the victim’s money during the three-and-a-half years she had power of attorney, according to the state’s attorney’s office.

(Source: Sun-Times Media Wire © Chicago Sun-Times 2013. All Rights Reserved. This material may not be published, broadcast, rewritten, or redistributed.)