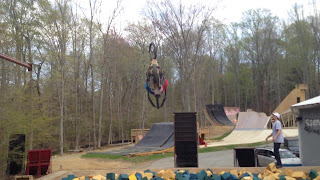 [photo: Despite being paralyzed from waist down, Doug Henry is able to perform a backflip on a specially rigged motorcycle as Travis Pastrana looks on. Photo from Doug Henry’s Facebook page]

Travis Pastrana—FMX superstar and daredevil—has done a few motorcycle tricks in his day, and obviously knows what it takes to perform a backflip on two wheels. So when fellow motocross legend Doug Henry wanted to try a backflip into a foam pit, Pastrana told him he wouldn’t be able to do it.

Henry, paralyzed from the waist down from a broken back suffered in a Supermoto race in 2007, couldn’t lean back far enough on his special motorcycle fitted with a roll cage, or so Pastrana thought. The first attempt ended in failure, confirming Pastrana’s belief. The second attempt was made with a little extra throttle. See what happens, as both attempts were videotaped and posted on his Facebook page.

On his Facebook page, Henry talked about his time at Pastrana’s house and how he couldn’t leave without trying a backflip.

“I asked Travis about a backflip and much to my surprise, he said I would not be able to make a full rotation because of my cage, being strapped to the bike, and my inability to shift my weight far enough back,” he wrote.

Much to everybody’s surprise, Henry pulled it off.

To the camera, Pastrana added, “He just did a backflip without leaning back!”

Henry, who was strapped in to the 450cc dirt bike, was obviously thrilled.

We hasten to add that there were plenty on Facebook who were impressed, too. Said one Facebook commenter, “Only Doug Henry could pull that off!!!”