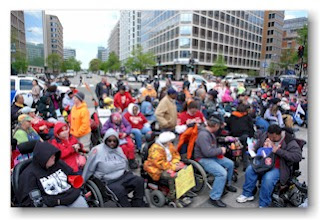 as posted and shared by Adapt - keep up the good fight..

ADAPT demonstrated its frustration with the Obama Administration today, crashing through barricades at Pennsylvania and 17th Street and blocking the east entrance to the White House. Forty-one people were arrested following a rally outside the White House security perimeter that gave the President's administration failing grades for leadership, integrity and engagement.

"The President has not taken the initiative to proactively champion community living or the innovative Medicaid programs that could make it a reality," said ADAPT organizer Josue Rodriguez of Memphis. "In nearly every way, President Obama and his administration have failed to live up to the promises about community living that he made during his presidential campaigns." 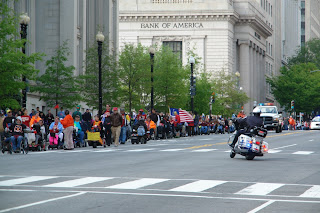 Most import is President Obama's promise to support integration of people with disabilities in the community. ADAPT demands that the Administration issue a statement that the President supports the development of legislation that would finally end Medicaid's institutional bias and assure that people with disabilities have community-based alternatives to institutional placement.

"I would tell the President to make the Community First Choice Option a mandate so that the Medicaid funds are not automatically spent on expensive nursing homes," said Tom Earl, the Director of Liberty Resources in Philadelphia who personally outlined this idea to President Obama in 2010. "The Medicaid expansion of the Affordable Care Act should include cost-saving home and community based services helping to put an end to the institutional bias." 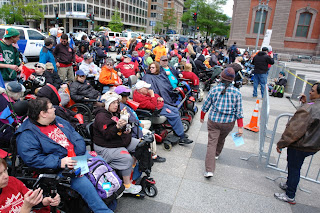 ADAPT began the Monday action visiting the White House and blocking the Pennsylvania Avenue entrance at 17th Street. At that entrance the group had a rally and discussed the disappointment of the Administration in dealing with the Disability Community. ADAPT held up a large report card for the President's term with failing grades for leadership, integrity and engagement.

"The President needs to live up to the commitments that he made when he was a candidate," said Heiwa Salovitz with ADAPT of Texas. "He gets an 'F' at the start of his second term."

"I think if we can do our part to highlight the institutional bias and stand-up for our community we have an obligation to do it," said Keith Percy a Boulder ADAPT Coloradical who was arrested today at the White House. "Unless we stand-up and do something about the issues of our people locked away then we never do get free." 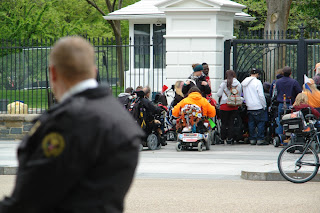 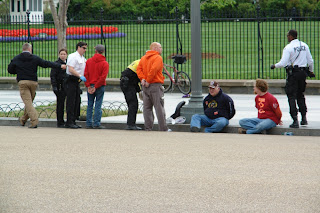 Francis Kimmes is a deaf activist fighting with ADAPT services for integrate and accessible housing for all disability individuals. He was grabbed by the police and thrown on the ground by the police. While hearing people were communicating and the wheelchair users were basically let go.

THE ABOVE INFORMATION AND MORE IS POSTED AT;
http://www.adapt.org/freeourpeople/2013/report03.php