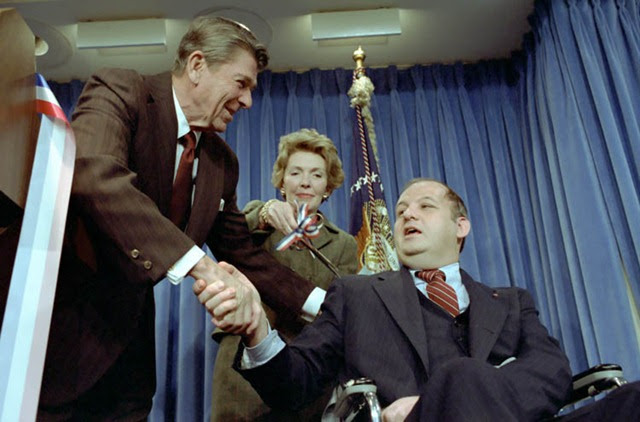 Former White House Press Secretary James Brady, who was shot during an assassination attempt on then-President Ronald Reagan in 1981, has died, according to his family. He was 73.

"Jim touched the lives of so many and has been a wonderful husband, father, friend and role model," his family said in a statement. "We are enormously proud of Jim's remarkable accomplishments — before he was shot on the fateful day in 1981 while serving at the side of President Ronald Reagan and in the days, months and years that followed. Jim Brady's zest for life was apparent to all who knew him, and despite his injuries and the pain he endured every day, he used his humor, wit and charm to bring smiles to others and make the world a better place."

Brady was confined to a wheelchair after suffering a devastating head wound outside the Washington Hilton Hotel on March 30, 1981. He later put his efforts into gun control, and along with his wife, Sarah and the Brady Campaign to Prevent Gun Violence is named in his honor.

The Brady Handgun Violence Protection Act was signed into law in 1993 by President Bill Clinton, which requiring a background check on handgun buyers.

The briefing room at the White House is also named for the former press secretary.
Posted by Jim Watkins at 1:33 PM