as shared by Access Living (CIL) of Chicago... (updated article below)

This blog post was coauthored by Adam Ballard, Community Organizer and Housing Advocate at Access Living, and Kate Walz, Director of Housing Justice at the Shriver Center.
You've probably seen the flurry of news coverage about low-income families living in $3,000 to $4,000 a month luxury apartments in downtown Chicago via a federal housing program. Sounds like just another story of people taking advantage of a government program, right? Really, what could make a better news story? Perhaps one grounded in the real details and the facts behind the program being attacked.
This controversy began with an amendment proposed by Rep. Aaron Schock (R–Peoria) to the United States Department of Housing and Urban Development’s annual appropriations bill. That amendment would prohibit public housing agencies from offering fair market rents in excess of 120%, otherwise known as “exception rents,” to landlords who participate in the tenant-based Housing Choice Voucher program. Schock’s stated rationale for the amendment is that the Chicago Housing Authority has paid rents in excess of 300% of the fair market rents, allowing voucher holders to live in tony apartments near the lakefront.
The Housing Choice Voucher program is one of the government’s main federal housing assistance programs, helping more than two million very low-income households, including families, senior citizens, and persons with disabilities, afford their housing by giving them vouchers to cover a portion of their rent in the private market. Vouchers are one of the best means of relocating families to higher opportunity and less violent neighborhoods and reducing homelessness and poverty rates for participants. The Housing Choice Voucher program also enables more than one million persons with disabilities, including veterans relying upon the veteran-specific VASH voucher program, to live independently in a community of their choice.
Schock’s amendment and the news coverage that followed missed the mark entirely. Less than 2% of the Chicago Housing Authority’s 38,000 vouchers have exception rents, and only a fraction of those vouchers have rents in excess of 200%. For all of 2013, there were only three vouchers with rents at the 300% cap.
None of the news coverage asked the question why such high rents were even needed. Here are a couple of questions that should have been asked: Is there a person in the household who is disabled and requires a hard-to-find accessible unit that can only be found in higher-rent neighborhoods? Is the housing close to a good elementary school for the family's children? Finally, is the housing in proximity to employment that may help the family lift themselves out of poverty?
The much larger issue is that the vast majority of voucher holders in Chicago live in high poverty, racially segregated neighborhoods and struggle to find units that are accessible. Indeed, only $1 out of every $10 spent on rents through the voucher program went to neighborhoods with lower rates of poverty and more opportunity.
Vouchers are also a lifeline for the disability community. Due to a pervasively high unemployment rate independent of recessionary cycles, the majority of people with disabilities rely on fixed-income benefits like Supplemental Security Income (SSI) and Social Security Disability Insurance (SSDI). These programs are not adequate to pay rent and still have money left for the other necessities of life. Once a person with a disability receives a voucher, the challenge is to find accessible housing, especially for those with significant mobility impairments. In Chicago and many older cities, antiquated housing stock built without physical access for this population makes the search very difficult. Agencies that provide housing search assistance for people with disabilities in Chicago and elsewhere are overwhelmed by demand that is impossible to fully meet—one such agency receives over 200 unique requests every month. The answer often lies in newer buildings in higher-rent and/or gentrifying communities. In order to make these opportunities possible, exception rents (often around 200%, but in rare cases as high as 300% or more) come into play as a “reasonable accommodation” under federal fair housing and civil rights law.
The Chicago Housing Authority’s effort to improve where voucher holders live by offering them a real and sometimes first chance to live in better neighborhoods and out of institutional settings (which are still more costly to the taxpayer than an exception rent voucher), is also what civil rights laws require. Without the ability to offer higher-than-market rents to landlords, the hard reality is that voucher holders struggle to find landlords willing to rent to them. Though voucher discrimination has been outlawed in Chicago and Cook County and other parts of the country, landlords still openly discriminate against voucher holders, particularly in higher opportunity neighborhoods. This refusal to rent to voucher holders is often pretextual, where the landlord’s actual reason for refusing to rent is discrimination on the basis of race, familial status, or disability.
When efforts were made to protect voucher holders from discrimination in Illinois, Aaron Schock, then a state legislator, opposed extending that protection. If Rep. Schock actually wants to work to improve the voucher program, let’s begin with the full set of facts, cut out the rhetoric and splashy news pieces, and support every effort to permit voucher holders to live in communities of their choice. 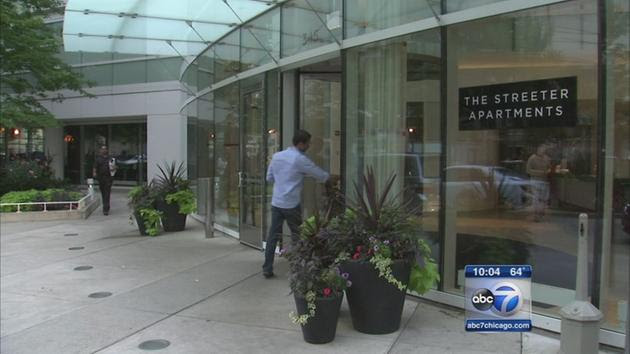 The Chicago Housing Authority is subsidizing the rent for low-income residents in some of the city's priciest apartment buildings. (WLS)

By Ben Bradley
Sunday, August 17, 2014
The Chicago Housing Authority is scaling back a controversial program that allowed some low income renters to live in several of Chicago's priciest downtown high rises. $2,500 per month rent was no obstacle to luxury living for recipients of the so-called "super vouchers." As Crain's Chicago Business and ABC7 first reported in July, the program paid a sizable portion of the rent for some occupants of the plush Aqua Tower and the high-end Streeter apartment building in downtown Chicago.

"After concluding a review and analysis of exception payment standards, we believe adjusting the policy strikes a critical balance between providing housing options for voucher participants and fiscal responsibility," CHA CEO Michael Merchant announced via press release Sunday. The changes will impact approximately 260 of the 700 families currently using "super vouchers." Not all of them live in luxury down apartment buildings. The program was created by the U.S. Department of Housing and Urban Development to allow those with low incomes the chance to live in "opportunity areas" with better transit, career options and schools.

The program came under fire after it was revealed the high end lifestyles were being subsidized by tax dollars at a time the CHA has a waiting list of 15,000 people hoping for any help at all. "When it comes to the luxury high rise units, there's no excuse why the CHA is doing this at taxpayer expense and at the expense of thousands of Chicagoans who are denied any access to vouchers because the CHA runs out of money," Rep. Aaron Schock (R-Peoria) told ABC 7 in July.

The CHA says the scaled back program will offer participants up to 150% of the U.S. Department of Housing and Urban Development fair market rent, down from 300%. Fewer than 2% of CHA subsidy recipients receive the more valuable "super vouchers."