in support of people with disabilities around the world, and what they have and are still facing in some countries...

Many children born with a mental disability in Nova Scotia have not been provided the supports they need to live at home. For 60 years children were placed here by social workers, welfare workers and their own families. In these controlled living situations defenceless children were exposed to physical and sexual abuse. From 1991 to 1996 the Department of Community Services in Nova Scotia closed the youth training centres down. 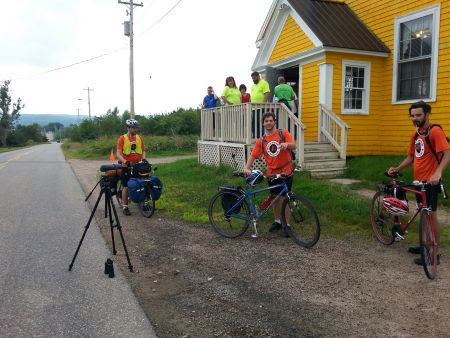 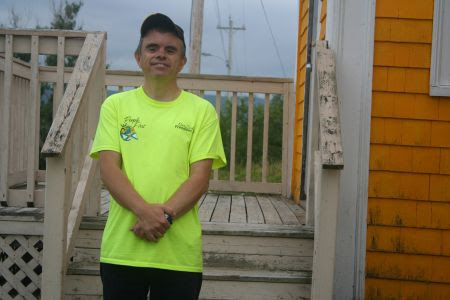 Donnie MacLean, president of the Annapolis chapter of People First, believes ongoing pressure on Community Services is the only way improvements will happen. Photo Robert Devet
K'JIPUKTUK (Halifax) - There is a long history in Nova Scotia of locking people up because they appear different.
For some inmates, institutions mean sexual and / or physical abuse by staff or other inmates. For most, institutions are places that take away freedom and dignity, and make you feel less than human.
"Like hell," Dawn Kerr replied when asked what institutionalized living was like. "A friend of mine committed suicide just three years ago. He couldn't stand it anymore. They found him in his room hanging."
"Eleven years old and you come to a place like this, you don't know anybody, and you feel like you don't belong here. I felt homesick for a whole year," said Alan Harris, talking about the four or five years he spent at the Bible Hill Youth Training Centre before it was closed down in 1996.
Kerr and Harris are just two of the people featured in The Freedom Tour Nova Scotia, a powerful documentary produced by the Nova Scotia Association for Community Living(NSACL), and People First Nova Scotia, a self-advocacy group for people labeled with an intellectual disability.
The documentary, well over an hour long, provides vivid testimony of the damage done by institutions.
People talk about their feelings of despair while institutionalized. Others talk about the many blessings of a life in the community.
Other scenes show angry parents listing the many empty promises made over the years by politicans and Community Services bureaucrats.
Even today people continue to live in large institutions against their will. Waiting lists for the relatively few community-based options that are out there are so long that many don't even bother to apply.
"We need to get the word out that closing institutions is the main way to go," David Kent, vice president of People First Nova Scotia told the Halifax Media Co-op in Bridgetown, where the documentary was just shown to some 30 people.
"I live in the community, and I wouldn't want anybody to go into an institution. Our motto isNothing about us without us," Kent said. "Labels should be put on jars, not people."
Film maker Brad Rivers is biking from Yarmouth to Sydney to show his documentary incommunities along the way. A screening in Halifax is also in the works for later this summer.
Along the way he talks to lots of people and raises awareness of the plight of institutionalized people in Nova Scotia.
"It is just a horrible way to live, being locked away like that," Rivers told the Halifax Media Co-op.
Rivers, who knew very little about the topic when he started the film, said that he worked closely with People First members while the documentary took shape.
"That cooperation was a great thing,"Rivers said. "They would always guide me through to the next thing. I really learned a lot about their community and how to approach the story."
The documentary often is an eye opener, especially for parents of people with disabilities. Rivers found.
"Parents often feel very isolated," Rivers said. "Finding that this is a province-wide issue and people everywhere have struggles with Community Services really unifies people."
Donnie MacLean, president of the People First Annapolis chapter, believes that political pressure is the only way that things will change for the better.
"We have to stand up for our disability," he said.
"And People First gives you the confidence to do that. If you walk away you are not going to help the situation."
http://halifax.mediacoop.ca/story/new-documentary-shows-horrors-life-institutions-no/31342
See also:
IndieGoGo: sponsor the Freedom Tour and raise money for a Grade 7 civics class education program on human rights and people with disabilities
Violent death of Quest resident part of a double tragedy
Community Services Transition Roadmap hits speedbump
Parents argue that their children should not face jail
Rallies throughout Nova Scotia call for end to criminalization