It sounds like a plot right out of a TV movie: A woman paralyzed since the age of 13 miraculously regains feeling in her legs and is able to walk again after being injured in a traffic accident. 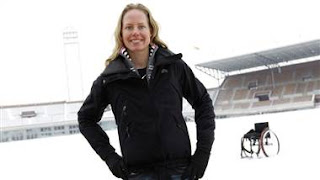 (photo: Monique van der Vorst, paralyzed since age 13, says a crash two years ago reversed her paralysis. Um. We have so many questions)

But that’s exactly what 27-year-old Monique van der Vorst says happened to her two years ago. Van der Vorst had turned to hand-cycling after losing feeling in her legs as a teen. She got so good that she won two silver medals in the Paralympics.

Two years ago while she was on the road training for the 2012 Paralympics, Van der Vorst was mowed down by a speeding bicyclist.

While in the hospital after the collision with the bicyclist, van der Vorst says she suddenly developed a tingling in her legs -- and within a year she was walking again. This week the announcement came that she’d joined a pro-cycling team and was looking forward to competing at the Olympics as an able-bodied athlete.

Van der Vorst’s doctors haven’t been able to come up with an explanation for her miraculous recovery -- and neither could any of the doctors interviewed by msnbc.com.

With the caveat that it’s impossible to comment on a specific patient without seeing actual medical records, physicians agreed that it was unlikely that anyone who had lost all feeling in their lower extremities could be healed by being hit hard in an accident.

“I have never heard of a case of damage to the spinal cord where someone lost feeling and strength in their legs and then had a second accident that gave them feeling back,” said Dr. Michael Boninger, professor and chair of the department of physical medicine and rehabilitation at the University of Pittsburgh School of Medicine and director of the rehabilitation institute at the University of Pittsburgh Medical Center. “The fundamental truth is that accidents don’t cause damaged nerve cells to regenerate.”

Still, Boninger added, “I would have to also say that there’s a lot in medicine that we don’t know and a lot we have yet to learn.”

The cases where you do see recovery tend to be those in which patients still have some feeling and ability to move right after a spinal injury, said Dr. Bruce Dobkin, professor of neurology and director of the Neurologic Rehabilitation and Research Program at the University of California, Los Angeles. “If some sensation and movement is retained after such an injury (as in most of the athletes injured on a football field), recovery of walking is likely in 90 percent of cases,” he added. “The process of improvement after such an injury can take up to a year after the incomplete cord injury.”

Van der Vorst says she initially lost feeling in her legs after suffering nerve damage from an ankle operation when she was 13. That problem was compounded by a later car accident in which her spine was injured.

If a person’s peripheral nerves -- the ones that run from the spinal cord to the extremities -- are damaged, they can at least partially regenerate, Dobkin said. “The longest nerves, the ones that move the toes and ankles, may take 18 months to partially regrow, but do not always extend far enough to improve voluntary movement,” he explained. “So, rehab specifically aimed at improving whatever voluntary movement is available can benefit a patient at any time, but is most valuable in the first 12 to 18 months after an injury.”