Metra Trains more accommodating to Cyclist then People with Disabilities.
As reported by our friend Heather Armstrong on Sept 25, 2011

Ability Chicago Note:
From wheelchairs, to prosthetics, to heart conditions, to neurological conditions, to mobility conditions, to etc etc etc. Those that have a need to use Priority Seating area on Public Transportation in the Chicago area are daily faced with many obstacle's. But of course were wrong because the transit agencies tell us so... Jim

* YouTube video by Ability Chicago members, a TY to our friends Heather & Garland...
###

Metra Bicycle Policy 2011
For 2011, bicycles are permitted on all weekday trains arriving in Chicago after 9:30 A.M. and leaving Chicago before 3:00 P.M. and after 7:00 P.M., and on all weekend trains, with the following exceptions:

*As a reminder, Metra reserves the right to prohibit bicycles if coaches are crowded or access is impeded, and makes no assurances that space will be available for bicycles.

1. Individual cyclists must be at least 16 years old. Riders aged 12 through 15 must be accompanied by an adult. Children under 12 are not permitted.

2. Only five bicycles per ADA car on each diesel train will be allowed in designated priority seating areas; two for each equivalent Metra Electric car. For 2011 the following number of bicycles can generally be accommodated per train:

All Electric cars are accessible; bike capacity varies by number of cars per train. 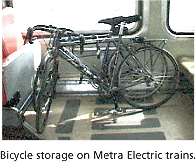 4. There is no additional charge for bicycles.

5. Train conductors will make the final decisions regarding the ability to accommodate bicycles on each train. All cyclists must follow instructions of Metra train crews.

6. Train crews are not required to assist with boarding bicycles; their primary responsibilities are for passenger safety and assisting those with disabilities.

7. The wheelchair lift will not be used to load or unload bicycles.

8. Cyclists must be considerate and allow all passengers (including those with mobility devices) to board and alight before carrying their bicycles on or off the train.

9. Cyclists may be required to leave the train if ADA space is needed for boarding passengers with disabilities. If cyclists are required to detrain prior to destination, passengers who purchased a cash fare from the conductor will be given a refund by that conductor. Passengers riding on One-Way or 10-Ride tickets will have their ticket returned with the following notation "Good for One Additional Ride."

10. Bicycles cannot block aisles or impede passenger movement. Cyclists must stay in the vicinity of their bicycles at all times.

11. In case of evacuation, bikes will be left on the train, clear of aisles and doors.

12. Metra makes no assurances that space will be available for bicycles on designated bike trains (including late-hour trains). Cyclists will be accommodated on a first-come, first-served basis.

13. Bicycles are permitted on all weekday trains arriving in Chicago after 9:30 a.m. and leaving Chicago before 3 p.m. and after 7 p.m., and on all weekend trains.

14. Bicycles must be kept clean and free of dirt and grease while aboard Metra trains. Bicycles that present a hazard to other customers or Metra facilities are prohibited.

15. Bicycles must be secured to the lower rail of folding seats in the priority seating area with long bungee cords (approximately 36 inches recommended) or other devices supplied by the cyclist which adequately secure the bicycle.

16. Folding bicycles in protective covers are permitted on all trains at all times but should not block train aisles or doorways.


More Helpful Information - Visit the City of Chicago Department of Transportation Bicycle Program website for free publications including a map showing the best streets for cycling in Chicago. Additional resources for biking throughout Cook, DuPage, Kane, Lake, McHenry and Will counties can be found by visiting the League of Illinois Bicycles and the Active Transportation Alliance.
Posted by Jim Watkins at 3:23 PM

That's pretty unbelievable in that video. I take the train everyday, but with a folding bike, which I can keep next to me, and out of the way of folks who need priority seating.