James Sak and Snickers were reunited by an Iowa court today. 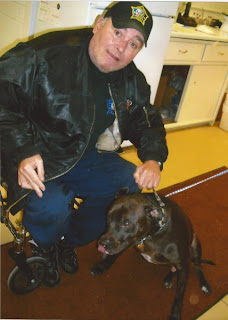 The pair received widespread attention after the city of Aurelia, Iowa, told Sak, a retired Chicago police officer and disabled Vietnam War veteran, to get rid of Snickers. Why? Because despite being a certified therapy dog, Snickers is also part pit bull, and like a growing number of municipalities, Aurelia has a breed ban.

Regardless of how you feel about pit bulls, the city’s response appears to violate the ADA. Sak had a stroke in 2008, and the University of Illinois Medical Center in Chicago trained Snickers to help him walk, keep his balance and get help in emergencies. The Americans for Disabilities Act guarantees people with disabilities the right to have service dogs regardless of breed.

Labrador retrievers are probably the most commonly recognized service dogs, thanks to the wonderful work of nonprofits like Guiding Eyes for the Blind. But German Shepherds and other “aggressive breeds” are, too, and undergo the same intensive training and temperament testing. The dispute over Snickers could set an important legal precedent for similar cases and help protect the rights of the disabled.

According to the Sioux City Journal, the judge who issued the preliminary injunction regarding Snickers has “no desire to overturn any city’s ban on pit bulls.” It’s about allowing “one service dog the chance to do his job,” he says. The city can still appeal the decision. But for now, Snickers is coming home — and his supporters have something to cheer. 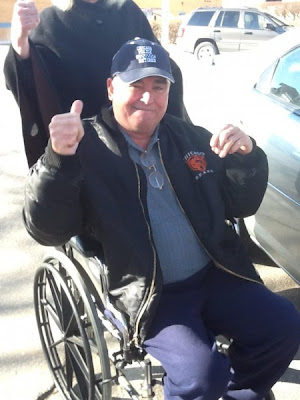 {photo: James Sak leaves federal court in Sioux City, Iowa, on Wednesday. "Today I got my peace of mind back," he said. "I hope that nobody else has to go through what we went through." (Photo by Kim Wolf, Animal Farm Foundation)}