Today (December 20), in Federal Court, the Court a landmark agreement that will offer thousands of people with disabilities in nursing homes the opportunity to choose to live in their own apartments instead of in institutions. The agreement is the latest step in Colbert v. Quinn, a class action case originally filed in 2007 on behalf of people with disabilities living in Cook County nursing homes. Lenil Corbert, an original plaintiff in the case, after learning of the Court’s approval, said, “It feels great. Now I know there are other options for people.” 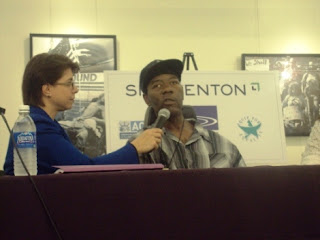 {photo: Lenil Colbert speaking in August about the importance of indepence and choice for people with disabilities}

Below is a news release issued by the parties in the case that represent the Class.

(CHICAGO, December 20, 2011 – A groundbreaking Consent Decree approved today in Federal Court will end the forced, long-standing and unnecessary segregation of people with physical disabilities and mental illness living in nursing homes. The agreement in Colbert v. Quinn, signed today by Judge Lefkow, for the first time will give Medicaid-eligible nursing home residents in Cook County a meaningful choice about where they wish to live, affording them the opportunity to live in their own homes and participate in the community.

In Cook County, thousands of people with physical disabilities and mental illness are warehoused in nursing homes because, due to the state’s payment structure, they cannot get the services they need in the community. When the consent decree in Colbert v. Quinn is implemented, the State will provide housing assistance to nursing home residents who wish to transition into the community. “In the nursing home, I lost the freedom to make basic decisions about my own life, like when to get up, what to eat, and who to room with,” said Lenil Colbert, a named plaintiff who lived in a nursing home at the time the original complaint was filed. “I think that everyone in a nursing home should have the option to move out.”

Today’s approval by the Court is the latest development in the case Colbert v. Quinn, originally filed in August 2007 on behalf of a class of nursing home residents with disabilities in Cook County. According to the Americans with Disabilities Act and the 1999 U.S. Supreme Court Olmstead decision, people with disabilities have the right to receive long-term care services in the most integrated setting appropriate to their needs. The vast majority of people with disabilities who are receiving Medicaid have no meaningful alternative to living in a nursing home. “By providing housing assistance, Illinois is addressing the single greatest obstacle to Medicaid-eligible nursing home residents being able to return to the community,” said Steve Gold of the Law Offices of Stephen F. Gold, co-counsel for the class.

“Most of us prefer the comforts of our own homes or apartments, with all the headaches and happiness that can bring. People with disabilities are no different,” said Patti Werner, from Access Living, co-counsel for the class.

Under the Decree, the State will provide housing and related assistance, including personal assistants, to at least 1,100 Cook County nursing home residents with disabilities during the first two and a half year period of the agreement – the first phase. “This Decree is a huge step forward for thousands of people who want to live and participate in communities of their choice,” said Marca Bristo, President & CEO of Access Living. “We commend the Court for approving the decree because it recognizes the right of people with disabilities to choose where to live. We look forward to partnering with the State to implement the agreement.”

After the first phase, the State will continue to provide housing and related assistance to other Cook County nursing home residents with disabilities so they can move into the community. During the second phase, the state will implement a comprehensive plan to move Medicaid-recipients living in nursing homes who desire to move into the community in accordance with a plan based on data collected during the first phase. The State will spend no more, in the aggregate, than what it is now paying to serve people with disabilities living in nursing homes. “Historically, nursing home costs have far exceeded the costs of community-based services,” said Karen Ward of Equip for Equality, co-counsel for the class. “This Decree not only offers people with disabilities the choice to live independently, we believe it will also provide a significant cost savings to the State.”

Colbert v. Quinn is the third in a trio of class actions brought against the State on behalf of people with all types of disabilities living in institutions to assure them the choice to live in the community. The other two cases, Ligas v. Hamos and Williams v. Quinn, reached similar settlement agreements and have also been approved by the Court. “Court approval of the Colbert agreement brings us closer to our goal of ending the involuntary segregation and isolation of people with all types of disabilities in nursing homes and institutions across Cook County and Illinois,” said Benjamin Wolf of the ACLU of Illinois, co-counsel for the class.

Access Living and SNR Denton, which is providing representation on a pro bono basis, are serving as lead counsel on the case. The plaintiffs are also being represented by attorneys from the American Civil Liberties Union of Illinois and Equip for Equality, and by the Law Offices of Stephen F. Gold. Colbert v. Quinn is case number 07 C 4737. For documents related to the settlement, visit www.accessliving.org. For more information, contact Gary Arnold at 312-640-2199 (voice), 773-425-2536 (cell), garnold@accessliving.org .

About the ACLU of Illinois
The American Civil Liberties Union is a non-partisan, non-profit membership organization dedicated to protecting and extending freedom, liberty and equality to all in the United States. The work of the ACLU is based upon, but not limited to, protecting the liberties and freedoms guaranteed by the U.S. Constitution, especially the Bill of Rights. With a membership of more than 500,000 nationwide - more than 23,000 in Illinois - the ACLU accomplishes its goals through litigating, lobbying and educating the public on a broad array of issues affecting our liberties. For more information, www.aclu-il.org.

CHICAGO – December 20, 2011. Governor Pat Quinn today released the following statement regarding the settlement of the last of the Olmstead class action lawsuits.

“I have made community care a priority of my administration, and our long-term goal is to rebalance Illinois’ approach towards older adults and persons with disabilities by expanding choices for those who want to live in the community.

“An important step in this process was settling the three Olmstead class action lawsuits, which had been pending for many years. I committed to resolving these lawsuits when I took office, and today’s decree allows Illinois to move forward and increase opportunities and independence for our state’s elders and residents with disabilities.

“With these settlements and our other rebalancing initiatives underway, Illinois is well on its way to assuring older adults and people with disabilities care and treatment in the most community-integrated settings appropriate for their conditions. We are moving in the right direction on community and home-based care, and I look forward to continuing this effort.”