The only Accessible Frank Lloyd Wright home to become a Museum in Illinois : Dec 15, 2011 ROCKFORD, IL. Local preservationists won the bid to buy the only Frank Lloyd Wright house in Rockford, which was sold at auction today in Chicago.

The Laurent House Foundation Board offered the sole bid and bought the home for $578,500, said John Groh.
He is president of the Rockford Area Convention and Visitors Bureau and is an adviser to the group.

Groh said there were no other bidders for the home. Auction staff called foundation members into a room as the bidding for the home was about to begin to let them know that no one else had signed up to bid.

Groh said the foundation group is “extremely pleased” that the community “stepped up to save this treasure.”

It is the only house Wright designed to be handicapped accessible.

Groh said the group has collected enough in pledges to cover the amount being paid for the house and its Wright-designed furnishings.

He said the foundation board will continue to collect pledges and contributions to make a few repairs on the home and to get it ready for use as a museum.

He said the group wants to raise more money to maximize the amount of money the state said it will give in matching funds: up to $500,000. That dollar-for-dollar match requires the foundation board to raise an equal amount of money in order to collect that top dollar. The city of Rockford pledged $75,000 and Winnebago County, $50,000. 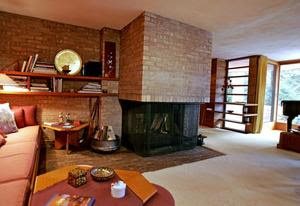 Kenneth and Phyllis Laurent sold the home they’ve lived in for nearly 60 years to move to assisted living. Laurent, a World War II veteran who has was in a wheelchair, asked Wright to build him a home in 1948. The Laurents moved into the home in 1952.