Ms. Wheelchair Illinois America, preliminary to the national Ms. Wheelchair America advocacy program, promotes the achievements and the needs of people who utilize wheelchairs for mobility

The mission of Ms. Wheelchair Illinois America is to provide an opportunity of achievement for women who happen to be wheelchair users to successfully educate and advocate for the more than 52 million Americans living with disabilities. It is a competition based on advocacy, achievement, communication and presentation to select the most accomplished and articulate spokeswoman for persons with disabilities.

As Ms. Wheelchair Illinois America, the titleholder has numerous duties. These include promoting awareness of the need to eliminate architectural and attitudinal barriers and informing the able-bodied public of the achievements of the millions of people with disabilities across the state of Illinois. During her year long reign, she will have the opportunity to travel visiting advocacy groups, making public appearances and conducting radio, print ad, and TV interviews. The commitment and personal example of the titleholder serves to further the mission of Ms. Wheelchair Illinois America.

Ms. Wheelchair Illinois, and 30 other state title holders, will go on to compete at the televised 40th national Ms. Wheelchair America competition, to be held August 2012 in Providence, Rhode Island. For applications and further information or to become an official state sponsor, please contact us at: http://www.mswheelchairillinois.org 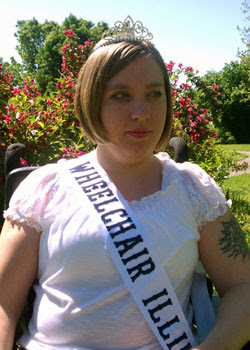 Wendy was born on August 16, 1984 in Alton, Illinois with Cerebral Palsy. She is the oldest of four children, and a graduate of Alton High School. After graduating from high school, Wendy attended Lewis and Clark Community College in Godfrey, Illinois where she earned an Associate in Arts. From there, Wendy went on to study at Southern Illinois University Carbondale before transferring to Southern Illinois University Edwardsville (SIUE). She graduated with a B.S. in Mass Communications on May 7 th , 2011 from SIUE and married Gregory Settles on May 14 th , 2011. Since the age of nineteen, Wendy was a board member at IMPACT CIL; she also worked at IMPACT CIL during her time at SIUE as an Independent Living Specialist in home services. Wendy has also interned at the Edwardsville Intellinger. She looks forward to represent Illinois during her year long reign, so she can be an advocate for disability rights. Disability advocacy has always been a major part of Wendy's life. Her platform is to focus on the negative portrayal of people with disabilities in the media. Being in the media field, she takes advantage of opportunities to educate her peers and the media on how to more accurately portray people living with disabilities. Wendy also competed against 30 other state titleholders at the national Ms. Wheelchair America Pageant, held in Grand Rapids, MI.
Posted by Jim Watkins at 7:46 AM